The NHS: Fight for it or lose it 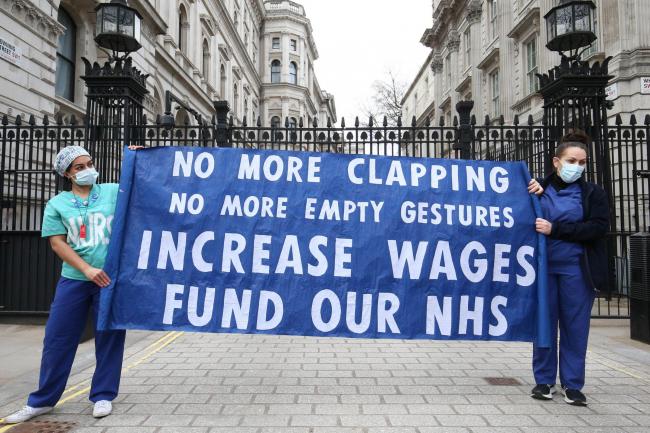 Felicity Dowling writes: The NHS is now facing its greatest threat yet in the form of the Government White Paper (soon to become Bill), even as the pandemic is still with us, though slowing.

“Councillors, trade unions and elected representatives need to realise the ICS express train is about to crash through any idea of one National Health Service very soon, as the government proposals look likely to be in the Queen’s Speech in May.

This is not just another NHS reorganisation, bad as they have been. Previous privatisations have been about the Virgins, Sercos, Carillions and other privateers stealing cakes from the NHS bakery. The White paper on ICS is about splitting the NHS bakery into 42 parts and handing them over to the privateers.

These multinationals will be sitting on the decision-making bodies, 83 major corporations, 22 from the US, are already heavily involved in developing ICSs. Councils will find themselves lucky to have one seat at the table from half a dozen or more councils and no powers of scrutiny over closure of hospitals and services.

While ‘integration’ sounds appealing, ICSs are about dismantling the NHS. ICSs are based on a US insurance-based model aiming to spend less on health & care. Fixed annual budgets won’t be based on need, resulting in more rationing and postcode inequality, fewer services, down skilling & outsourcing of jobs, local pay and further cuts on top of the 10 years of austerity in the NHS.”

We need a public campaign to demand the restoration of a fully funded NHS. It should be waged in the communities, in the unions, in all labour movement and working-class organisations.

Left Unity supports campaigns to restore and repair the NHS using the original Bevan Model. The Bevan Model involves all these features, running as a national publicly owned and coordinated system.

The Bevan model does not include multi-national health care corporations leeching off the service, providing substandard treatment and employment conditions, as was introduced in the last major piece of legislation. Nor does it include excluding migrants from treatment.

The NHS White Paper finalises changes already implemented, made without legal status. The new system revolves around Integrated Care Systems based in 42 segments of the country. They are very damaging and will see much more private ownership and control, much more involvement of US health corporations and their subsidiaries in health service in the UK.

The NHS is fundamental to all our lives. It protects us from the horrors of denial of care and exorbitant charges that we see in the USA, where medical bills are the major cause of bankruptcy. Treatment free at the point of need, providing a comprehensive range of treatment, available to everyone, funded directly from government, provided not for profit, are the foundations of the NHS.

The crisis in India shows the weakness of using individual hospitals without a coherent system linking all providers. The NHS is one of the most efficient health providers in the world but requires both proper funding and an influx of staff. The national system of employment rights, conditions and pay and professional training systems are also crucially important and at significant risk.

Since the Health and Social Care Act 2012, we have seen significant cuts, huge loss of beds Hospital closures and significant loss of pay and working conditions in the NHS. Shortage of staff, chronic shortage of beds and appalling planning left the NHS in serious trouble at the start of the pandemic. Mental Health Services have been particularly hit. Few mental health beds are now left in the NHS, most are provided by Priory. The situation facing maternity, infant mortality and women’s health are particularly of concern.

Resources for the NHS have traditionally been around 9% of GDP, nearly half the cost of the US system which provides far less and leaves many without treatment or bankrupt. The lucky ones pay nearly the equivalent of an average mortgage to cover a family’s health insurance. The traditional NHS finance system is cost effective and efficient. There are major service improvements required especially after these years of Austerity, however, in no situation would the US system be more cost effective or efficient, or provide better universal care.

Whilst the staff and services have been starved of resources, private companies have been ever more infiltrated into the NHS, with no electoral mandate to do so. Services to the public have been cut whilst money has gone to multinational companies. There are direct links between the senior management of the NHS and the US health corporations.

This is not a coherent alternative system, well planned researched and evaluated, but a major privatisation, possibly the largest privatisation yet in the world, and has been in planning for a decade.

Privatisation does not just mean patients paying for treatment. It also means that the resources that come from the government go not to patient care, but to the big corporations who are involved in expensive “advice” at national regional and CCG level. It means that treatment is restricted and then offered to patients for a price These big corporations infest the current NHS. They are involved in PFI in the hospitals, in advice on reconfiguration of services, in bidding to run services, and in the case of mental health providing the majority of beds. These services are run not for human need but for profit, and are abandoned if the profit ceases to flow.

All of this is described in words of such sweetness and obfuscation that the plan is well disguised.

“Accountable Care” sounds as if it is a system where the service must answer to the public, whereas it really describes the work of an accountant.

“Integrated Care” sounds as if health and social care will work well together. However, there are no extra resources for the mainly private social care providers. Existing NHS resources may be given the private social care system, who will in turn be given greater control over the NHS in the new structures. The role of councillors will be restricted.

We have seen the damage that a private sector run Social Care for the elderly system has meant over years, and in the pandemic.

The White Paper will make campaigns to save individual services and hospitals much harder as the local councils will have less say.

Keep our NHS Public, Defend our NHS, Health Campaigns together, call 999 for the NHS, Trades Councils and other great health campaigns are working to sound the alarm on this issue. Labour seem not to grasp the significance of what is happening and some of the Labour Party support the Governments direction of travel.

Despite the huge number of deaths, this government is claiming the pandemic as a success for their casually corrupt outsourcing. They are declaring it to a be a suitable model for the NHS in the Future. The NHS did succeed in delivering the treatment and the vaccination – the chaos came through the involvement of the private sector

The White Paper may go to parliament this month, however even if they do not go to parliament soon, the NHS will continue their development of the system which is already under way with the local STP/ICS ready to go in 2022, as they are assuming consent in advance.

We think our response should echo the response of the football fans to the European Super League and drive these proposals out of town.

Resources to fight the White Paper can be found at https://keepournhspublic.com/resources/resource-cabinet/

One response to “The NHS: Fight for it or lose it”