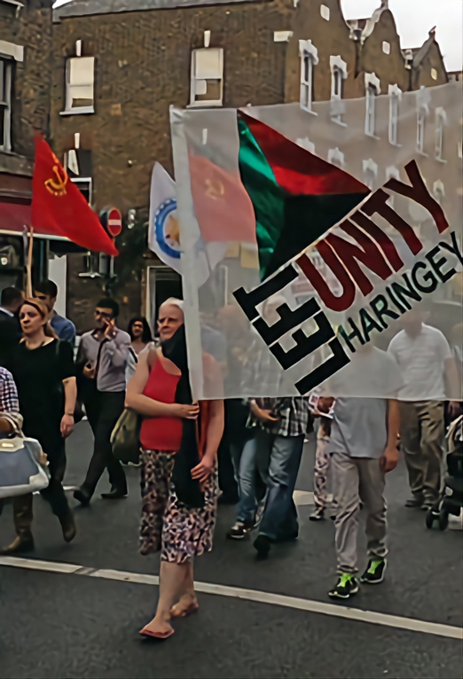 It is with great sadness that we have today learned of the death of our comrade Sarah Parker – a founder member of Left Unity and an active member of our North London branch. Sarah was a lifelong socialist and very active, notably in Haringey and in solidarity with the struggle of the Kurdish people. Sarah will be greatly missed.

I knew Sarah for nearly forty years. She was my friend, my sister and my comrade. Before I knew her well I remember thinking how courageous she was giving out leaflets on her own in the middle of Wood Green. I got to know her better around 1983 when she would often drop into Reading Matters, the community bookshop where I worked, to discuss politics, or literature or any number of subjects.

Sarah was an intellectual who never stopped studying: she had an MA in translation and was gifted at languages. She studied Classics at Newnham College, Cambridge where she met some of her life long friends. It was there that she began to be very active politically in women’s issues: giving out contraceptive advice for new students, lobbying for a creche and campaigning for a woman’s right to choose. An example of Sarah’s breadth of friends and acquaintances: she was Mary Beard’s lodger!

Sarah came from a political family; her parents Bill and Evelyn Parker were members of the Hornsey Communist Party but left after the invasion of Hungary in 1956. Apparently, they would have a party every Boxing Day for their political friends and old comrades; Sarah must have developed her critical thinking in this atmosphere of political debate. After university Sarah studied accountancy and then worked for the radical publishers Pluto Press and Black Rose Press as finance officer.

I became very good friends with Sarah because we spent many evenings together in meetings at Broadwater Farm helping to organise the defence campaign there. The Broadwater Farm Defence Campaign was set up up to address the wider issues of injustice and police-community relations, following the mass arrest of 369 young people during the uprising on 0ct 6th 1985 and to challenge the injustice of the convictions of the Tottenham Three. Sarah worked as the press officer for the campaign for a number of years.

At around that time Sarah moved into a flat I shared with another friend. An indelible image of Sarah is of her sitting on the stairs on the phone, talking about some seemingly intractable problem around the campaign, glass of whiskey and fag in hand, occasionally rolling her eyes at me. She worked indefatigably as Press Officer – enlisting the support, among others, of David Rose then journalist at the Guardian – when very few publications would touch BWDC stories. She also was able to brief the Defence campaign lawyers like Gareth Pierce in her scrupulous, inimitable style.

Sarah was committed to the defence of those wrongfully arrested in every way. She supported the Silcott family, the Scott brothers Stafford and Millard and I remember going with her to the Ashford Remand Centre to visit a 14 year old boy who was being held without access to due legal process.

Sarah was a staunch anti-racist and read widely about the history of racism. We both read and discussed The Black Atlantic by Paul Gilroy. Along with others on the left including Tony Benn, Sarah was instrumental in setting up the Committee to Defend Asylum Seekers and there again worked tirelessly to bring attention to the cause.

Sarah will be best remembered for her knowledge and activism in defense of the Kurdish people. Sarah had an extensive knowledge of the history and politics of the Middle East and started to put a great deal of her energy in campaigning for the liberation of Kurdistan, engaging in many different ways. She volunteered at the Kurdish Community Centre in Haringey where many people have told me how she helped them with translations, the benefit system and other problems.

She also organised meetings in the House of Commons enlisting John McDonnell and Jean Lambert in support of the Kurds. Sarah was a founder member of Peace in Kurdistan and remained a member for 30 years.

Sarah was an extremely well-rounded person, she was not only an intellectual. She was fantastically good company as she could talk about practically anything: she was interested in health, nutrition, plants, art, music and loved eating and cooking. My fondest memories of her are swimming together at Hampstead ladies pond seeing the occasional kingfisher, and going for a Turkish meal afterwards.

Sarah will be so greatly missed. I have held one end of the Left Unity Banner with her recently at the Stop HDV (Haringey Development Vehicle) marches. A fitting tribute to her would be to gather the left together to advance her work.