No to imperialist intervention – yes to the Syrian people’s revolution 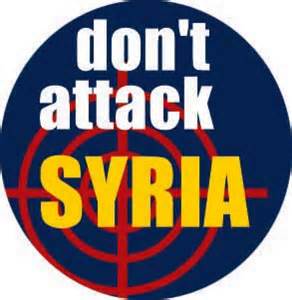 On 21 August, reports emerged that hundreds of people had been killed in a chemical
weapons attack in Eastern Ghouta, a rebel-held agricultural region just outside of
the Syrian capital Damascus. With reports of up to 1,700 dead, this atrocity is just
the latest in a long series of crimes committed by the dictatorial Ba’athist regime
of Bashar al-Assad, which has shot, clubbed, stabbed, shelled, strangled, tortured,
dropped bombs on and fired missiles from fighter jets at an average of about 110
people per day since the outbreak of a popular democratic revolution against it in
March 2011. Over 100,000 people have died since then, and one million Syrian
children have become refugees.

It did not take long, however, for people to cast doubt on the Assad regime’s
culpability. Russian Foreign Ministry spokesman Aleksandr Lukashevich suggested
within hours that the chemical attack was a “planned provocation” by the Syrian
rebels. Nor has this scepticism been confined to the Assad regime’s habitual
apologists like Respect MP George Galloway, who suggested that Israel had given
chemical weapons to “al-Qaeda” in Syria, and that the Eastern Ghouta atrocity was a
“false flag” operation to discredit Assad and bring about a Western military
response.

Left Labour media figure Owen Jones, in a 25 August article for The Independent
opposing Western intervention, said that we could not be sure “who fired the
chemical weapons at eastern Damascus”, and that “initial doubt that Assad’s thugs
could be responsible were hardly the preserve of conspiracy theorists”, going on to
ask why the regime would use nerve gas on its population while United Nations
inspectors were present in the country, while it had the “upper hand” in the civil
war, and while the threat of Western involvement had apparently waned.

In fact, this scepticism is far wide of the mark. Coming almost a year to the day
after US President Barack Obama declared that the use of chemical weapons in Syria
would constitute a “red line” that would “change his calculus” if crossed, and
almost two years to the day since Obama called upon Assad to step down from power,
this act looks almost like a calculated blow to the credibility of the United
States, already weakened by its failure to manage or encourage a “peaceful” transfer
of power in Syria, such as those that took place in Egypt, Tunisia and Yemen after
the popular uprisings in those countries in the “Arab Spring” of early 2011.

Knowing that the continued support of Russia, China and Iran is secure, and that the
West is more troubled by the apparently unpredictable consequences of a rebel
victory in Syria than by popular revulsion at the Assad regime’s mass slaughter, the
Syrian regime has calculated that it can strike a blow like this in broad daylight,
in full view of the world and its own people, and get away with it. Bashar al-Assad
has called Barack Obama’s bluff.

Socialists should always condemn attacks on civilians, but we should choose sides in
revolutions and civil wars according to the declared goals of the revolutionaries,
and not according to the methods that they use to fight for those goals. In Syria, a
popular movement for democracy confronted the tanks and bombs of Assad’s
dictatorship. A large section of the people took up arms to defend themselves, and
parts of the army broke with the regime to join the popular uprising.

In any civil war there will be progressive and reactionary elements; there never was
nor ever will be a “pure” revolution. Should we abandon the Syrian people’s struggle
for democracy because some Islamist reactionaries have carried out atrocities of
their own in the name of the revolution, albeit on much a smaller scale than the
regime’s? No: we should stand shoulder to shoulder with all those fighting for the
downfall of a brutal and tyrannical regime, a progressive goal in itself. The
military defeat of Assad and the victory of the revolution are inseparable.

Having spent the last two and a half years exploiting Syria’s revolutionary civil
war to shore up Obama’s “democratic credentials”, and to embarrass his Russian and
Chinese rivals in the Arab world without giving any serious aid to the Syrian
revolutionaries, the United States is now apparently preparing for a military strike
on Syria to recover its lost prestige and deterrent power.

Britain’s prime minister David Cameron, predictably trying to follow Obama’s lead,
was defeated in parliament on his government’s support for intervention, although
the French parliament voted in favour of President François Hollande’s calls for
military action.

Socialists are perfectly right to oppose the preparations for Western military
action now underway. The Western powers have absolutely no intention of aiding the
Syrian people in their struggle to overthrow a vile dictatorship. Indeed, as US
academic Edward N. Luttwak pointed out in an article in The New York Times, Obama’s
real policy in Syria – one that he fully supports – has effectively been based on
the premise that “America loses if either side wins”.

Only two days before the Ghouta atrocity, US General Martin Dempsey said in a letter
to a congressman that while the United States was easily capable of destroying
Assad’s air force, this would fail to secure US interests without troops on the
ground. Citing the usual bogeys around “ethnic rivalries”, he argued that “the side
we choose must be ready to promote” US interests if the balance shifts in their
favour, and that the currently diverse and fragmented Syrian opposition did not fit
that bill.

Israel’s rulers in particular are far happier with the manageable situation of a
weakened Assad, who has not once fired a shot in anger at Israel to recover the
Syrian Golan Heights, under Israeli occupation since 1967. A democratic Syria,
liberated from the Ba’athist dictatorship, would inevitably become a centre of
solidarity with Palestinians, Lebanese and others engaged in resistance to Israel’s
on-going occupation and colonisation of Arab lands.

As with the bombing of Libya during that country’s revolution and civil war in 2011,
and indeed the invasions and occupations of Iraq and Afghanistan, any Western-led
bombing of Syria will involve civilian casualties, and will only serve the interests
of the same rulers who support dictatorships elsewhere in the Arab world, including
in Qatar, Saudi Arabia and Bahrain.

However, to oppose Western military intervention in Syria without also showing
solidarity with the Syrian revolution, and without equally opposing the actual
“external intervention” by Russia and China that has been taking place in Syria for
the last two and a half years, is to abandon the Syrian people. Why? Because the
Syrian people, who have risen against a dictatorship, and who still maintain a mass
democratic movement against it despite its attempts to divert their entirely
justified struggle into an armed inter-communal conflict, have every right to expect
international solidarity, no less so than the Palestinians or the people of Tunisia,
Egypt, Libya, Bahrain or Yemen.

For this reason, we should not restrict ourselves to the Stop the War Coalition’s
official slogan “Hands Off Syria”, a slogan that could be and will be supported by
any pro-Assadist, and by any closet Islamophobe for whom Assad is either a “lesser
evil”, or for whom there is “nothing to choose” between the regime and the diverse
range of popular forces arrayed against it.

Rather, we should be demanding aid without strings to the Syrian people against the
Assad regime: not just food, shelter and medical aid for Syrian civilians (almost a
half of the country’s population has required life-saving medical attention in this
conflict), but the sort of heavy weaponry the fighters need to protect themselves
and their communities from their own government’s blood-stained air force, militias
and conscript army, weaponry that could turn the war around in their favour. We
should demand that the countries of the European Union open their borders to all
Syrian refugees who wish to come here, and lift the current regime of travel
restrictions on Syrian nationals intended to prevent them from claiming asylum.

Most importantly, we should open up a campaign within the British and European
labour movements in solidarity with the Syrian resistance to the Assad regime, along
the same lines as the long-established campaigns of solidarity with the Palestinian
people, and the more recent campaigns in defence of the emerging labour movements
and democratic struggles in Egypt and Tunisia.

Doing this will mean doing a far greater service for the Syrians than Obama, Cameron
and company ever could by bombing their country, and far greater than could ever be
achieved merely by opposing our own governments’ war preparations while washing our
hands of our internationalist obligations.