Some people have asked about the difference between the People’s Assembly being held in June and the Left Unity project. Andrew Burgin explains that the initiatives are complimentary. 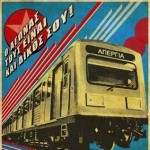 Britain stands on the verge of a triple dip recession. The government is relentlessly pursuing its austerity policies. This year the unemployed, the disabled, the low paid and many other vulnerable groups will all find their benefits and wages cut and many millions will be pushed further into poverty. The ‘bedroom tax’ will drive many working class families out of their homes. Our cities will be socially cleansed.

Hundreds of food banks have been opened over the last two years and the Trussell Trust, which operates many of these, estimates that 1,000 will be needed in order to stop serious malnutrition and hunger – this in one of the richest countries in the world.

Under cover of austerity the right is attempting the destruction of the entire welfare and social system established in the post-war period.

Billions of pounds of health contracts are being transferred to the private sector and these private health companies are financing the election campaigns and work of those pursuing this privatisation. There is a corruption at the heart of public life which has only been partially exposed by the expenses and lobbying scandals of recent years.

Cameron and Clegg are rolling back the welfare state to an extent that Margaret Thatcher could only dream about. When Thatcher contemplated introducing similar measures she met opposition even within her own cabinet. How times have changed.

Tory ministers now talk openly of there being a clear end to the NHS should they be re-elected in 2015.

The decades of Tory and New Labour rule have seen the evisceration of the labour movement and many trade union leaders have failed to defend their members and the movement adequately in the face of this onslaught. Unionisation of the private sector stands at 15% and the unions have drawn back from the defence of public sector pension provision.

Up until now opposition to these attacks has been fragmented and weak, punctuated by some significant trade union-led marches against austerity, occasional direct action campaigns by UK Uncut and others, and rallies and conferences called by a number of different national anti-cuts groups. The emergence of dynamic local campaigns in defence of specific services, such as libraries and hospitals, has been the most effective and inspiring factor in the anti-austerity movement. But the absence of a coherent and united national movement to challenge the government’s cuts agenda – and pose alternatives – has been hard felt by those on the front line in these struggles. 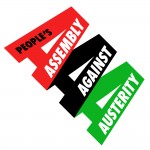 Now, however, there is a possibility of united action against austerity. The call for a People’s Assembly against Austerity – and particularly the breadth of support it is receiving – is of tremendous importance. The call, initiated by the Coalition of Resistance and Unite the Union, brings together trades unions and anti-cuts activists from a wide range of organisations and has the potential to take the movement beyond the limits of the single day event on which the call is based.

Moreover the call has been strengthened by the participation of a group of important left-wing activists such as Owen Jones and Mark Steel and others who are prepared to build the Assembly by touring the towns and cities of Britain, agitating for the Assembly and aiming to unite all those who oppose austerity.

There are groups that stand outside this process. The Socialist Workers Party and the Socialist Party both have their own national anti-cuts organisations. However, the hope now must be, given the weight of trade union and campaigning involvement in the People’s Assembly process, that all anti-austerity work can be united under its banner.

What is significant about the decision of the Coalition of Resistance to initiate the People’s Assembly – which can make it more than merely a successful one day conference – is that it is conceived as an open process with its own dynamic. CoR will devote itself to the success of the Assembly but on the basis of equal participation by others both in the process and the outcome.

This is a genuine opportunity to create the single national united anti-cuts organisation that we have long recognised the need for.

That this is a possible great step forward for the working class cannot be denied. We can harness the social weight and capacity for mass action of the trades unions together with the seething anger and sense of injustice felt by those facing austerity.

The anti-austerity movement and the Labour Party

Participation in the Assembly process will help shape a united front against a common enemy. But clearly it won’t imply complete political agreement between all participants. Many hope that the People’s Assembly will strengthen the left in the Labour Party and will force an incoming Labour government in 2015 to reverse the privatisation of services and welfare cuts of the current government.

Others, and we in Left Unity are in this camp, think that this, regrettably, is not possible. It is not that the great majority of the working class will not vote Labour in 2015. Where they do still vote, they will largely vote Labour, but this is not because they expect any significant change. The only expectation that rests in the Labour Party is that it will be marginally better that the Tories. Very few expect a wholesale reversal by Labour of the neo-liberal policies imposed by this government and by the previous Labour governments of Blair and Brown. Miliband’s shadow cabinet message is clear – there will be no significant reversal of the Tory cuts. Indeed there has been no progress yet beyond the ‘slower cuts’ mantra.

The Labour Party has never been a socialist party but was founded by the trade unions to provide political representation for the organised working class, and was able in the period of capitalist boom to make some limited reforms in the interests of that class. With the change in political orientation of the Labour Party and its embracing of neo-liberalism it no longer fulfils its historic role in relation to the working class, leaving that class politically defenceless in the current economic crisis. In the absence of the Labour Party, there remains an objective need for a political force which will represent – and fight for – the interests of the working class.

New parties of the Left

There cannot be many on the left in Britain who do not have some experience or knowledge of the various attempts to build a new political organisation to the left of the Labour Party. From the Socialist Labour Party and the Scottish Socialist Party, through to the Socialist Alliance and Respect, we have witnessed a catalogue of sectarian political strife which has resulted, despite some false dawns, in failure and political despair.

However difficult it may appear to be, the task of constructing a serious broad-based working class party is an essential component of the fight against austerity. A political response to the crisis is essential. It is not sufficient that the opposition to austerity remain at the level of trade union and community struggles. Trades unions, even under left wing leadership, cannot substitute for the building of new parties of the left which must engage with broad social forces not necessarily organised within a trade union framework.

The objective need for this development and the political space that it will occupy has existed at least since the mid-1990s. We recognise that the success of such a party will only take place to the extent that it engages in mass movements and articulates and advances the needs of the working class. New parties flower in a period of big struggles but the need for such an organisation exists independently of these struggles and it is the responsibility of socialists to make clear the goal and to lay the groundwork for this development. 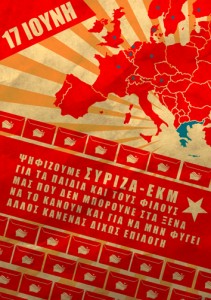 Propaganda poster of SYRIZA for the Greek national elections of 2012

Elsewhere in Europe new political formations of this type have already emerged and are playing a central role in the anti-austerity movement. SYRIZA, (Coalition of the Radical Left) in Greece is the most successful so far, being formed around Synaspismos – established in the context of the fall of the Berlin Wall in 1989. Until recently, SYRIZA was a very small force on the left, but its politics have enabled it to meet the challenge facing the Greek working class.

Greece is the beating heart of the economic crisis in Europe. There the entire social fabric of the society is being dismantled. Athens this winter is covered in smog through the burning of wood because people cannot afford oil and gas heating to stay warm. Hospitals have run out of basic medicines. The suicide rate has increased by 400%. People scavenge for the basic means of existence.

The people of Greece have fought courageously against the avalanche of cuts. Since 2009 they have had more than twenty days of general strike action. There have been strikes in many industries and occupations of hospitals and steel plants. The young people who now suffer from 60% unemployment have protested in the squares and city centres.

Up until last year the social democratic party PASOK was in government. In the elections of 2009 PASOK received just under 44% of the vote and SYRIZA polled 4.6%. Further elections were held in May and June last year and then the vote for PASOK collapsed to just over 12% and that of SYRIZA rose to close to 27%.

SYRIZA, with a clear anti-austerity programme, came within a hair’s breadth of being able to form a government. Throughout Europe, new parties which have been forged through the struggles of the last two decades, uniting left forces on an anti-capitalist programme, are now occupying the political space vacated by the rightward move of social democracy.

No doubt it can be argued that the conditions in Britain preclude such a development, whether that be the historic relationship of the working class to the Labour Party, the blighting of the movement by the Thatcherite onslaught, or the first past the post electoral system. These factors undoubtedly make the task more difficult but nevertheless it is a necessary task. We cannot continue to be the only country in Europe that has a political desert to the left of neo-liberal social democracy.

Even to pose this question amongst comrades – and begin the discussion of what is necessary and what is achievable – is of enormous value.

In reality, the construction of such a party is the only route out of this crisis. This is an international economic crisis which exposes the limits of capitalist development and poses the need for a complete reordering of the economic priorities of society. That is why a new party is necessary and why the discussions that we have begun with a range of organisations and with other comrades in the movement are worth continuing.

Should you wish to attend these discussions please contact us.

8 responses to “Left Unity: On broad fronts and new parties”