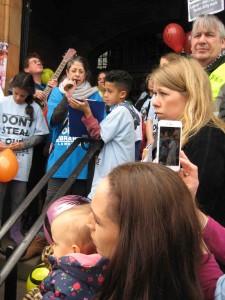 In mid April, shortly after a 10-day occupation of the Carnegie library in Lambeth, the first cracks appeared in the monolithic Progress run council in Lambeth. Councillor Rachel Heywood issued an open letter entitled “Why I broke ranks” referring to the fact that she marched with and spoke publicly in support of library campaigners at a mass rally in Brixton.

The letter said, “I was proud to be amongst those marchers, and passing through the Loughborough and Angell Town estates of my ward – both a stone’s throw from the now closed Minet and Carnegie libraries – provided a hugely powerful reminder of why taking this action was the right thing to do for every single one of us on that journey. Our communities are in crisis and the gap between wealth and poverty is growing.”

Councillor Heywood is one example of what an occupation, combined with a series of strike actions by Librarians can do, set alight a struggle and inspire a community to action.

The Carnegie Library in Herne Hill, Lambeth, is a fine Grade 2 listed building, opened in 1906, with an art nouveau interior and a large children’s library. It was this beautiful building that Lambeth council had decided to hand over to Greenwich Leisure Limited (GLL) to turn into a gym with a few bookshelves attached.

Campaigners around Defend the Ten libraries met in the threatened Carnegie library and decided to occupy the day of its planned closure. Six of us formed an organising committee and over 150 people turned up for the “closing down party” on Thursday afternoon. About 40 of us never left the party!

Initially we had planned to stay for the weekend, opening up the library for meetings and events. In fact we stayed for 10 days and nights. It was a frenetic period of campaigning, issuing press releases, and talking to the media about the issues behind the library closures – not only Carnegie was closed that day but Minet Library as well.

What took us all by surprise was the degree of media interest and the overwhelming support of the public who ridiculed the idea of “bookish-gyms”. Fortunately the occupation took place the same week as the BBC had done a national survey of library closures showing that 525 libraries had been closed since 2010. So the Carnegie Occupation became big news with a never ending stream of journalists and TV cameras coming into the library. The Financial Times ran a half page article in its Saturday issue bemoaning the fate of libraries, the London Evening Standard ran several sympathetic articles, while even Le Monde reported on the struggle.

By Saturday afternoon Lambeth Council, clearly scared of all the bad publicity, took control of the doors with a large number of security guards. They were instructed that anyone who left could not come back in. Police arrived in numbers asking to come in and warning us that our occupation was in danger of being “taken over by socialists”!

While the “leave and your out” policy made life difficult for us, in enforcing it the Council managed to shoot themselves in the foot.

When ITV and BBC turned up one evening to film the occupation they were told by security that they could only film “through the bars” at the front entrance. The TV companies complied, filming a hearty rendition of “We will not be moved”, accompanied by our resident guitarist Tom, through the bars.

One of the best things about the occupation was the active involvement of young people – almost half the occupation was of school age, the youngest five-month old twins and part of a three generation occupying family. For the youngsters it was like a long sleep over in a children’s library – and best of all without showers or baths!

Communal cooking was helped by an ever growing pile of donations being passed by well wishers through the front bars. A councillor’s dismissive tweet about wine being drunk with meals led to an avalanche of the red and white stuff. Decisions were taken by the general meeting once or twice a day along with rota’s for keeping the place tidy and allocating tasks. Every occupation gives you a little glimpse of how socialism will work and rarely have I seen a happier bunch of people.

It was decided to end the occupation when the court order arrived, as the council’s war of attrition had reduced the occupiers to less than 20. Little did we know how successful the demonstration called that Saturday would be – over two thousand people blocked the roads outside the library to welcome the occupiers as they marched out and made speeches from the library steps.

The occupation, and the Defend the Ten campaign, itself would not have been possible without all the political groups and community organisations working together. LP Momentum members, the Socialist Workers Party, the Green Party as well as the Libraries’ Friends worked together without friction throughout the campaign, although there were resignations from the LP from people who had just had enough.

Highly disappointing however was the reaction of national Momentum. While national and London media were scrambling to have ever more reports of the library occupation, and Socialist Worker covered it in depth, the national Momentum news Facebook site remained an “occupation no go area” – despite requests to cover it. A motion to support the Lambeth library struggle brought to the national Steering Group wasn’t taken. Jon Lansman argued that it wasn’t the job of national Momentum to add its weight to local struggles or take a position on them!

Many of us thought this was just cover for an unwillingness to support a major struggle against a Labour council in the middle of the GLA election campaign. The library campaigners drew the exact opposite conclusion. This was the best of all times to take what a Labour council was doing into the public domain and pressure the London LP into tackling a right wing council which itself was sabotaging the campaign. Two lobbies were held of LP fundraisers, one for a Lambeth councillor who had voted for every library cut and was now standing “on her record” for the GLA. It was a record we were pleased to bring to the attention of the public and ordinary LP members.

The library occupation has undoubtedly strengthened the struggle against closures and cuts. The council has already made minor concessions both before and after the occupation but nowhere near enough to satisfy the campaigners. The task now is to force the re-opening of the closed libraries and consign the “bookish gyms” plans to the dustbin of history.

Further up to date information: http://defendthe10-lambeth.org.uk/

One response to “Lambeth libraries: Occupation puts council on the back-foot”