Doug Thorpe, National Secretary of Left Unity, reports: Over an hour before the meeting queues were snaking in both directions along St John’s Hill from the Clapham Grand, the venue for the London Launch of the Enough is Enough Campaign. Once inside the old Victorian theatre, the feeling was more like a gig than a political rally. The audience of about 1,300 (many others were locked out after capacity was reached) were of all ages but predominantly young, mirroring the early rallies in support of Jeremy Corbyn.

The key theme echoed by most speakers was that we are in the middle of a cost of living crisis which the government is responding to with a vicious attack on the working class. But much to their surprise organised sections of the working class are fighting back. One of the aims of the campaign is to build picket line solidarity. But beyond that, it aims to organise collective action against those profiting from and causing the crisis, starting with the energy companies. Dave Ward said: “This campaign is not about committees it is about action”.

It was good to see a People’s Assembly speaker on the platform and hopefully this heralds a co-operation between the two campaigns.

The speakers, including Zarah Sultana, stressed that this campaign is independent of any party, including Labour – although she did send a clear challenge to her party saying the crisis was “workers versus bosses – pick your side!”.

Mick Lynch closing the rally (after attending a similarly large rally in Glasgow the previous night) was clear that this was a class struggle against profiteers and a far-right government intent on making the working class pay for the crisis, passing legislation like the Police Bill & anti-trade union legislation to aid them in repressing struggles and protest. Against this he announced that the campaign & affiliated unions would throw their weight and money behind building organisation, both in the workplaces and communities to fight back.

The organisers are clearly overwhelmed by the response, with 400,000 signing up and over 6 million views of the launch video in the first week. There will be 50 rallies across the countries of Britain. But as well as rallies there will be organisation of picket line solidarity, and proposals for collective action against the energy companies. More details will be on the website www.wesayenough.co.uk over the next few days. Leaflets were given out with details of four Enough is Enough branches in London and how to join them (see below). Details of how to join branches in other areas will appear soon. 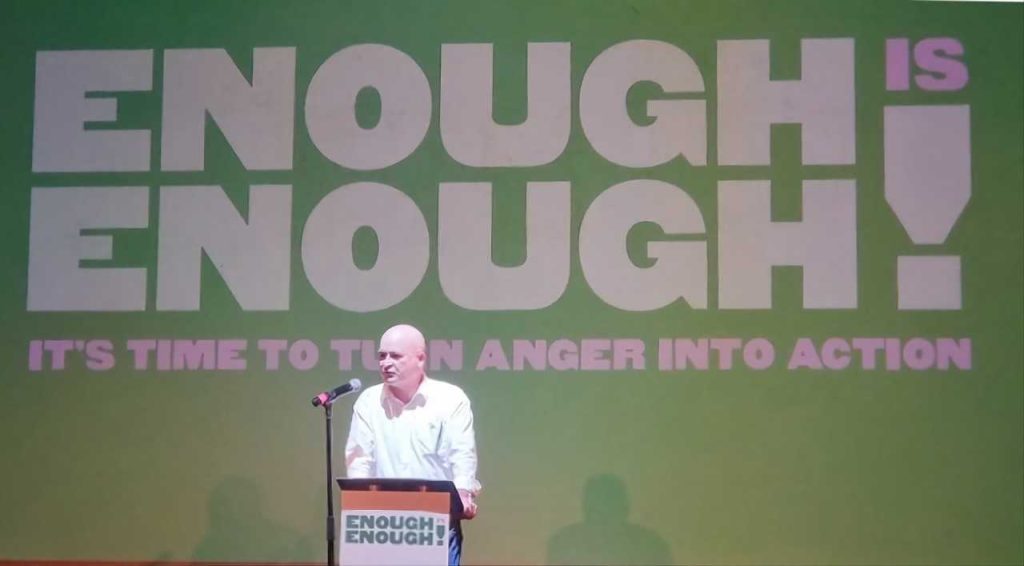 The response from the crowd was joyously enthusiastic, a clear hope that this may be the campaign that so many have been waiting for was evident. How this develops remains to be seen, but I for one, will embrace it and do what I can to build it. I would urge all Left Unity members to sign up to the campaign and get involved in its local groups and activities. We will continue to write about the development and potential of the campaign on our website in coming weeks.