We are publishing below the Ecosocialist Alliance’s COP26 Statement, drawn up by Left Unity, Green Left and Anti-Capitalist Resistance, along with a list of the organisations and individuals who have endorsed our Statement. 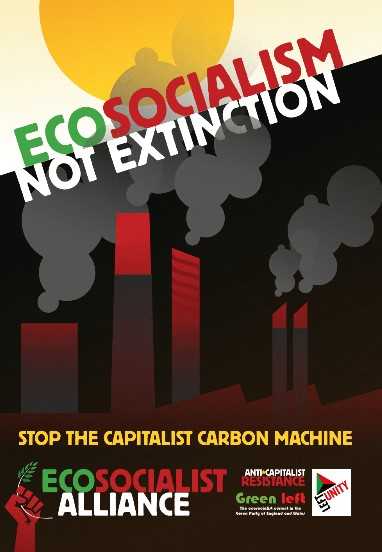 If you’re going to the Glasgow or London COP26 demo on Saturday 6 November, then look out for our banner and broadsheet/placards:

To support the statement and to keep informed about the Ecosocialist Alliance, and our particular actions, email:

COP 26 unfolds against a backdrop of growing climate chaos and ecological degradation, after an unprecedented summer of heatwaves, wildfires, and flooding events. Climate change is upon us, and we face multiple interlinked and inseparable crises – of climate, environment, extinction, economy and zoonotic diseases.

As ecosocialists, we say another world is possible, but a massive social and political transformation is needed, requiring the mobilisation of the mass of working people across the globe. Only the end of capitalism’s relentless pursuit of private profit, endless waste, and rapacious drive for growth, can provide the solution not only to climate change, environmental degradation, and mass extinction, but to global poverty, hunger, and hyper-exploitation.

The big issues of climate change will be debated in Glasgow but, whatever is agreed, capitalism can at best mitigate climate change, not stop it. Genuine climate solutions cannot be based on the very market system that created the problem. Only the organised working class, and the rural oppressed and First Nations of the global south – women and men – have the power to end capitalism, because their labour produces all wealth and they have no great fortune to lose if the system changes, no vested interests in inequality, exploitation, and private profit.

• All fossil fuels must stay in the ground – no new gas, coal, or oil!

• A rapid move to renewable energy for transport, infrastructure, industry, agriculture, and homes

• A globally-funded just transition for the global south to develop the necessary sustainable technologies and infrastructure.

• A major cut in greenhouse gas emissions of at least 70% by 2030, from a 1990 baseline. This must be comprehensive – including all military, aviation, and shipping emissions – and include mechanisms for transparent accounting, measurement, and popular oversight.

• The end of emissions trading schemes.

• An immediate end to the encroachment on and destruction of the territories of indigenous peoples through extractivism, deforestation and appropriation of land.

The long-term global crisis and the immediate effects of catastrophic events impact more severely on women, children, elders, LGBTQ+ and disabled people and the people of First Nations. An eco-socialist strategy puts social justice and liberation struggles of the oppressed at its core.

Migration is, and will increasingly be, driven by climate change and the conflicts and resource wars resulting from it. Accommodating and supporting free movement of people must be a core policy and necessary part of planning for the future.

• Immediate cancellation of the international debt of the global south.

• A rapid shift from massive ‘factory’ farms and large-scale monoculture agribusiness towards eco-friendly farming methods, and investment in green agricultural technology to reduce synthetic fertiliser and pesticide use in agriculture and replace these with organic methods and support for small farmers.

• A major reduction in meat and dairy production and consumption through education and provision and promotion of high- quality, affordable plant-based alternatives.

• The promotion of agricultural systems based on the right to food and food sovereignty, human rights, and with local control over natural resources, seeds, land, water, forests, knowledge, and technology to end food and nutrition insecurity in the global south.

• The end of deforestation in the tropical and boreal forests by reduction of demand for imported food, timber, and biofuels.

• An end to ecologically and socially destructive extractivism, especially in the territories of indigenous peoples and First Nations .

• Respect for the economic, cultural, political and land rights of indigenous peoples and First Nations.

• A massive increase in protected areas for biodiversity conservation.

We demand a just transition:

• Re-skilling of workers in environmentally damaging industries with well paid alternative jobs in the new economy.

• Full and democratic involvement of workers to harness the energy and creativity of the working people to design and implement new sustainable technologies and decommission old unsustainable ones.

• Resources for popular education and involvement in implementing and enhancing a just transition, with environmental education embedded at all levels within the curriculum.

• Urgent development of sustainable, affordable, and high-quality public transport with a comprehensive integrated plan which meets peoples needs and reduces the requirement for private car use.

• A planned eco-socialist economy which eliminates waste, duplication and environmentally harmful practices, reduction in the working week and a corresponding increase in leisure time.

• Work practices reorganised with the emphasis on fair flexibility and working closer to home, utilising a free and fast broadband infrastructure.

As eco-socialists we put forward a vision of a just and sustainable world and fight with every ounce of our energy for every change, however small, which makes such a world possible. We will organise and assist wherever possible worker’s and community organisations internationally, raising demands on governments and challenging corporations.

One Vote for the Planet (UK)