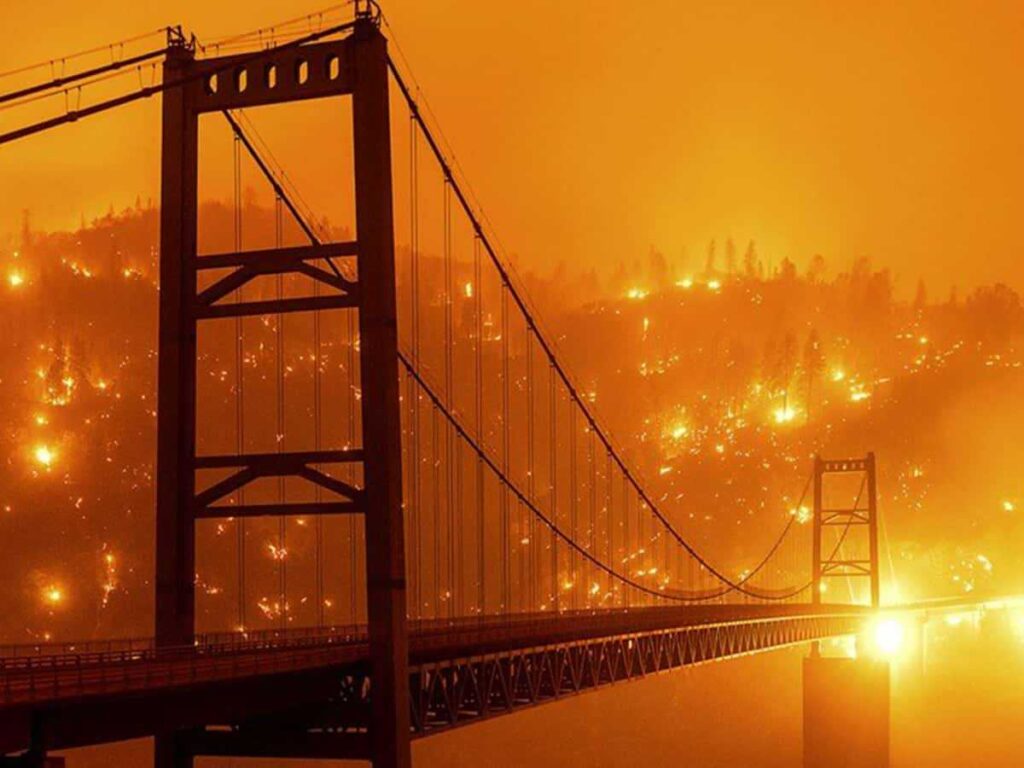 Allan Todd writes: More than 100 wildfires are currently raging across 12 western US states in the Pacific Northwest – those affected include Alaska, Arizona and Colorado, as well as Oregon, California and Washington State. According to the National Interagency Fire Centre, some 4.4m acres have so far been razed in these infernos – an area only slightly smaller than Wales. But even before these wildfires broke out, this summer’s particularly harsh heatwave had meant that c. 45m people were already under an ‘excessive-heat’ warning or heat advisory.

The wildfire season is usually from July to November, when hot, and dry winds are most frequent. But these dozens of wildfires are now being fanned by unusually hot dry winds. The worst-affected states are Oregon, California and Washington where entire towns have been destroyed. In all, around 500,000 people have been ordered to evacuate, and the number of confirmed deaths is now over 10.

More than 900,000 acres have been burned in Oregon in just last few days – that’s almost double the amount that normally burns in an average year. In addition, five towns have been destroyed, leading Oregon’s Governor, Kate Brown (Democrat), to say:

“We have never seen this amount of uncontained fire across the state…This will not be a one-time event. Unfortunately, it is the bellwether of the future. We’re feeling the acute impacts of climate change.”

As reported by the Oregon Office of Emergency Management, over half a million people in Oregon are now climate refugees, having been forced to flee dozens of ‘unprecedented’ fiery infernos – that’s more than 10% of its 4.2m inhabitants. This includes mass evacuations from Portland, Oregon’s largest city. And, as Rich Tyler, a spokesperson for the Oregon State Fire Marshals’ Office told the New York Times:

“When you have a fire that burns through homes and businesses, you have open gas lines that are still spewing out natural gas, and those are burning.”

One of the most destructive infernos in Oregon has been the Almeda Fire, which stared in Ashland, near the border with California. This is what an area of the town of Phoenix looked like after the fire had raged through: 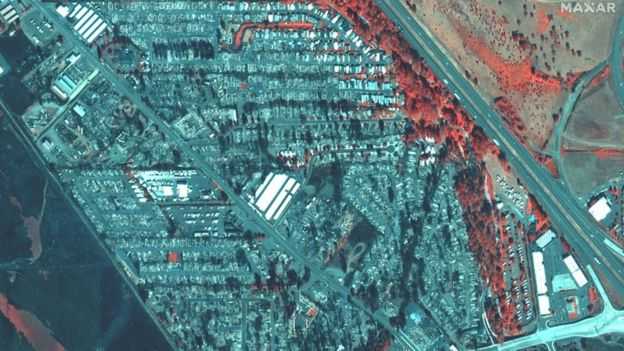 In California where the smoke from its many wildfires has been turning the skies to an apocalyptic orange one fire, 14,000 firefighters are battling 29 major fires. Six of the 20 largest wildfires ever recorded in the history of California have occurred in this year!

One fire – said to be the third largest on record in that state’s history, and that started at the height of the heatwave – is currently racing towards North California’s world-famous wine country.

Around 100,000 citizens, just west of Vacaville (a city between San Francisco and Sacramento) have now been ordered to evacuate – including the 30,000 residents of Paradise, Butte County, which was largely destroyed in a few hours, by a fireball in the 2018 Camp Fire, which left 80 people dead. Those wildfires in 2018 were, at the time, seen as the ‘worst’ outbreak of wild fires in California’s wildfire-prone history.

However, as well as the dangers from fire, there are also huge risks from smoke pollution: on Thursday 10 Sept, air pollution levels in Portland were recorded as being the highest in the world – above the levels found in Jakarta, Delhi or Lahore.

There’s also the additional worry of Covid-19 spreading in the hastily-erected shelters, set up across the states for those climate refugees fleeing the raging infernos. It should not be forgotten, of course, that Covid-19 – a zoonotic virus – itself is a product of the increasing destruction of natural habitats by industrialised agriculture, deforestation and the worsening impacts of human-driven global heating.

On top of all that, there are also the economic impacts, not just the lowering of home values, but the job losses that will result from the destruction of businesses and factories. The tourist industry, and local government budgets, will also be badly hit.

Words that are increasingly used in relation to such extreme weather events – they are NOT ‘natural’ disasters – are ‘unprecedented’ and ‘record-breaking’. The fact that they were used so frequently was a warning that has been ignored by many. Because so many events linked to the Climate Crisis happen each year, it’s easy to focus on the current event, and forget those which happened a year (or less) ago.

Amongst those worth recalling are: 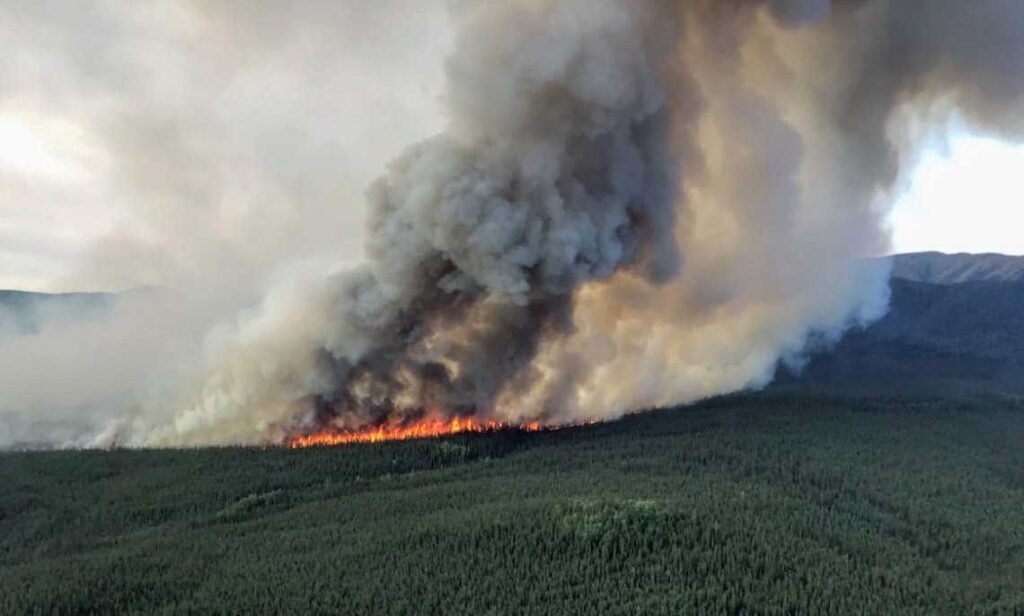 The most significant of all the Arctic wildfires were those in Russia: it wasn’t just burning trees, it was also fires smouldering in dried-out peat, much of it formerly locked up, safely, in permafrost. By the end of July 2019, those blazes had released more than 120m tons of CO2 – yet another ‘all-time record’ – that was more than the total annual emissions of Belgium. 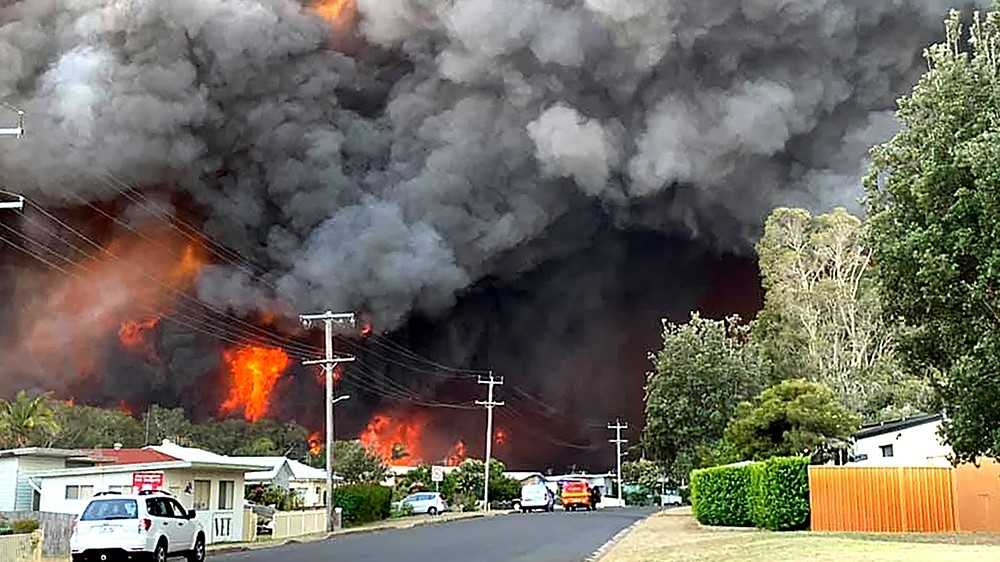 Even if many people were too busy to notice – or remember – all these warnings, there were plenty of climate writers and activists who were telling us we needed to start worrying and, more importantly, acting.

Naomi Klein, in her appropriately named 2019 book, On Fire: the Burning Case for a Green New Deal, wrote about the impact of wildfires in the USA’s Pacific Northwest:

“The mood was fierce, too, in San Francisco, when more than a thousand student strikers shared stories of living with chronic asthma because of polluting industries in their neighborhoods – and then getting a whole lot sicker when wildfire smoke choked the Bay Area just a few months before the strike. The testimonies were similar at walk-outs all over the Pacific Northwest, where smoke from record-breaking fires had blotted out the sun for two summers running.”

Even earlier, in her other book about the Climate Crisis, This Changes Everything: Capitalism vs. the Climate (2014), she drew attention to how, ultimately, humans are dependent on the natural world:

“The deep sense of interdependence with the natural world…..is, of course, far less obvious in densely populated cities… [but] when something…cracks, or come under threat,… we catch glimpses of how dependent & vulnerable we really are. And yet these cracks are appearing with greater regularity.”

Much more recently, Mark Lynas, in Our Final Warning: Six Degrees of Climate Emergency (2020), has warned how we risk going above a 1.5C increase in the average global temperature; even the UK’s Climate Change Committee has said the world could be on course for a 4C increase. According to Lynas, even a 3C increase would lead to:

“…colossal firestorms eliminating the Earth’s most biodiverse terrestrial habitat [the Amazon rainforest] and pouring tens of billions of tonnes of additional carbon into the atmosphere from burning wood and peat.”

He also points out how the ‘record-breaking’ wildfires in California in 2018 and 2019 have been linked to changes in atmospheric circulation, possibly triggered by the disappearance of Arctic sea ice. These changes are one of the factors behind the devastating multi-year drought that has parched much of the south-western United States, making the area tinder-dry and extremely prone to wildfire outbreaks, as we are currently seeing.

Even Trump has been forced to declare a state of emergency as a result of the fires now raging in the Pacific Northwest. But much more is needed than that: he, and the rest of the world’s governments, needs to declare a Climate Emergency.

As Alan Thornett makes clear in his excellent book, Facing the Apocalypse: Arguments for Ecosocialism (2019):

“The driving force behind these fires is not difficult to identify. It is human induced global warming, which intensifies year on year. More heat means more fires: there is no mystery about it.”

The same holds true for the three ‘once-in-a-lifetime’ floods we’ve experienced in the UK; and all the other extreme weather events regularly occurring across the world.

What’s needed, ultimately, to stop the world going down the road to a ‘Hothouse Earth’ situation is ecosocialism. This is something that XR Scotland seems to be moving towards – and it is something that Extinction Rebellion UK needs to grasp too. The ‘System’ that needs to be changed, in order to prevent ‘Climate Change’, IS capitalism. There were encouraging signs in this month’s XR Rebellion that can be seen as pointing to steps in the right – ecosocialist – direction.