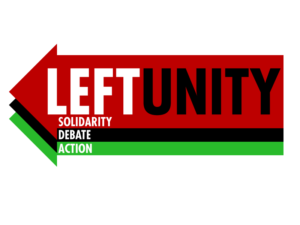 Left Unity National Council had the following discussion at its meeting on 19 September 2021:

The current crises: the Tories’ neo-liberal agenda and increasing need for repression

Despite the constant inability of the Tories to manage the contradictions these crises present to them as a government they show few signs of diverging from the expansion of the market to every corner of government and at the same time preparing the ground to prevent resistance through an never ending authoritarian programme of rolling back human rights and democracy.

Crisis on the left as Labour turns right

The ‘official’ opposition of the Starmer-led Labour Party amounts to no opposition at all – showing all the signs of turning the party completely away from class politics toward being one-nation liberals or even Tories.

The dangers people and the planet face cannot wait another 20 odd years for the Labour Party to turn away from this agenda.

A radical left alternative to Labour is urgently needed across the UK.

It will need to be part of an international organisation like the European Left while at the same time support radical independence movements within the UK.

There is growing working class disenchantment and resistance to the Tory government to the left of Labour that readily takes an active and political direction.

How best can Left Unity support and help the resistance and from it, build support for a radical left and transformatory political movement?

What is our current position?

National Secretary Doug Thorpe has recently set out our current strengths and weaknesses.

It is also critical not to lose sight of the continuing need for political parties as part of working-class resistance and directly challenging capitalism. See the latter paragraphs of the Left Unity Wales newsletter.

One key conclusion is that whilst we should actively help build resistance campaigns where we can, we are not in a position across the UK to initiate new campaigns without the support and very active involvement of socialists who are not members of Left Unity. Whilst being involved in these campaigns we can work to support demands and actions that start to directly challenge the Tories’ agenda and recognise the political importance of key areas of resistance such through rank and file trade union action.

The role of the working class is fundamental, battered and bitter though they might be at present. Struggles, campaigns and mutual aid both in the workplace and in the communities are the seed beds of our movement.

Trade Union membership and activity is growing but from a low base, (‘struggles’ in this context means campaigns that involve wide numbers of people in a community or in a workplace, campaigns mean attempts to challenge public understanding or government policy and to organise people to this end).

Our work is anchored in our communities and workplaces. It is in these struggles that new activists learn their trade, deepen their understanding and build their standing in the movement. This consolidates the belief in Socialism in stronger areas.

The rejection of TINA (“There is no alternative”) is fundamental to growing our movement.

Our capacity to work well with other activists in campaigns and struggles without hiding our politics is essential. Our understanding is that it is the power of the organised working class, organised for socialism that can change the world. It is with this idea that allows us, in our late comrade Steve’s words to ‘Storm Heaven’.

Left Unity and building a radical left party in the UK

In the absence of a lead from Corbyn or the PJP to make the break with the Labour Party and launch a project for a new radical left party the subsequent vacuum has seen some diminution of political activity but also a continued interest in a radical left alternative that has been expressed in a whole range of creative and more conventional ways. Across the UK new parties and groups have been set up as well as some increase in membership of existing left organisations.

It is a very encouraging sign that people are willing and keen to set up new groupings. However, there is a downside in political fragmentation when a new and invigorated unity is needed to take forward the challenge to the Tories and the neo-liberalism they represent.

As Left Unity with limited resources, the key priority should be to do what we can to help bring this unity into being.

We have a lot to offer in terms of our membership of the EL and our experience of building a new party from scratch. We also have an updated ecosocialist manifesto for the current situation and in the discussion papers linked above suggest an ongoing strategic debate and process that enables this manifesto to be taken forward now.

However, whilst we have this to offer, we must not just add to the competitive throng of proposing ‘we are the answer’. We need to work closely with the emerging new radical left groups and parties so that we help facilitate a discussion about creating unity and lessening the potential damage of fragmentation.

What organisational form this may take depends on how the discussions go. It could be a network, federation, or alliance; but our key aims, principles and experience provide a starting point, particularly our commitment to workers’ self-determination and to open, democratic accountability.

Some of the immediate steps we can take given our size, are to start jointly holding online meetings and workshops on key areas that we as a radical left should explore and develop positions on, as well as sharing articles, discussion and analysis on our website.

Decisions of the National Council (NC):

Without repeating the arguments the first two paragraphs of the latest LU Wales newsletter tries to sum these up, together with later paragraphs that relate to the constitutional crisis in the UK.

29 September 2021
To submit an article for the 'Discussion & Debate' section of our website please email it to info@leftunity.org