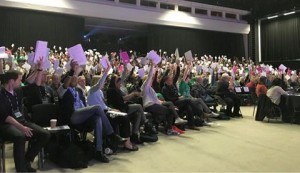 NUT votes to campaign against Prevent

The NUT voted overwhelmingly to boycott the ill-conceived new literacy and numeracy tests. The standards of children in year 6 (10-11 years) has risen so high that many will fail. The new tests have been brought in with little of or no guidance to assist teachers and they have little or no idea of how they can be marked. Levels that allowed progress to be tracked have been replaced with a ‘pass’ or ‘fail’ grade. The writing levels have been introduced with less than three months to implement creating massive stress for pupils and teachers. If these tests are not stopped, children will be labelled ‘failures’ by an incompetent examination system- we cannot allow this to happen.

Far from supporting a broad-based creative curriculum these tests focus on the categorising the function of words in sentences.

Just look at one example question given to year 6 children:

Show whether the word after is used as a subordinating conjunction or as a preposition.

He moved here after the end of the war.

Entry is free after 5pm in the evening.

I went to the cinema after I had eaten my dinner.

Circle the THREE nouns in the sentence below:

A whale has an enormous heart that can weigh as much as a small car.

How can this be appropriate when generating a love of reading? How can we sustain their interest and enjoyment when we reduce study to rote learning? Such tests seek to measure such a narrow element of the curriculum at the expense of social skills, friendship, reading for pleasure, applying knowledge creatively through play and social interaction. Children as young as six are being trained to pass these examinations in a bid to show that they can show significant progress in attainment at school. It is no surprise that we have record problems with mental well-being of pupils, a demoralised and demotivated teacher work force.

The NUT calls on the Secretary of State to cancel the tests and launch a campaign involving teachers, parents and communities to stop the excessive testing of children in our schools. Sign the petition to end testing, write to head teachers calling for them to support staff boycotting the tests. Talk to your child’s classroom teacher. Don’t let the Government fail another generation.

Alex Kenny also moved a motion calling for conference to campaign for the withdrawal of Prevent legislation. Conference resolved to work alongside NUS on this campaign and voted unanimously for repeal.  There was full support for a school system free from suspicion, repression and racial profiling.