The Italian Left on the political crisis in Belarus 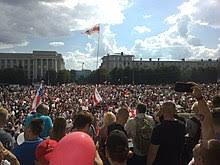 The crisis emerging in Belarus comes from afar with its origins to be found in the context that opened after the end of the Soviet Union. In that area, Belarus, under President Lukashenko, presented itself as the country where the legacy of “real socialism” was respected on a symbolic level whilst at the same time resisting the attractive force of the West, and strengthening the relationship with Russia.

Lukashenko, in office since 1994, developed policies to avoid the neo-liberal shock therapies, privatizations and cuts to public services that characterized Russia and other Eastern European countries after 1991. For a long time, he safeguarded and innovated companies and state-owned industries, he guaranteed favorable social conditions for the majority of the population and enjoyed widespread popular support. This model, largely based on the refining and re-export of Russian oil sold to the country at a subsidized price, has been gradually wearing thin.

The fall in the price of crude oil on the world market and the decision by Moscow to increase the prices of gas and oil, which also caused friction between the governments of the two countries, was decisive. The consequences of the economic difficulties in Russia were also significant

Despite a solid industrial base and a very low inequality index, in recent years there has been a sharp economic slowdown and the abandonment by the Lukashenko government of the previous trend towards wage increases and the safeguarding of welfare.

Restrictive economic measures were gradually adopted to address the shortage of foreign exchange reserves and public debt. At the same time, the government introduced norms to reduce workers’ rights and also to attract foreign capital.

Already in 2017, a law introducing a sort of punitive tax on the unemployed had sparked a wave of social protest in the country.

In 2019, the “Labor Code” was changed for the worse, increasing precariousness and the possibility of layoffs. In 2020, a privatization plan was announced for several large still state-owned enterprises, in addition to those already implemented. In addition, on the table there is also a “pension reform” with an increase in age to obtain a pension and the exclusion of military service, maternity leave and university studies from the count.

The traditional pro-EU and nationalist liberal opposition – certainly not without support from outside the country – has therefore found more space to reduce the consensus around a leadership characterized by bureaucratic and authoritarian paternalism, now poorly tolerated even by those social sectors that had long supported the government.

Moreover, through the adept use of “social networks” and electronic media the opposition forces have managed to erode the government’s monopoly of communication despite restrictions on trade union and political freedoms.

And, especially in recent months, Lukashenko’s style has been strongly de-legitimized by an opposition capable of reaching large sectors of the population by leveraging the discontent deriving from the worsening of living standards, the growing social inequality and the state attack on social and political rights. The management of the Covid 19 emergency, judged by many as inadequate, was very influential.

The clear and blithe violation of the most elementary rules of correct procedure by the government during the elections has triggered the escalation of demonstrations of dissent in recent weeks. The Belarusian authorities have unleashed a vast repressive campaign against their opponents with administrative sanctions, dismissals and arrests involving even the three main candidates. Even apart from the lack of detailed demonstration of actual fraud that the opposition itself and international organizations should have provided, the arrest of the opposition’s main competitors outlines a picture that is far distant from the internationally recognized rules for correct electoral competition.

The official electoral result of 9 August gave Lukashenko 80% of the votes (after 26 years of government it would be the 6th presidential term). However, the extent of the protests that have taken place in recent days, followed by strikes in all the large factories, show that the opposition to the government is much wider than that which would appear from the data provided by the Central Electoral Commission. Despite previous experiences in other contexts, which demonstrate that the ritual and cynical denunciation of fraud (generally false) is a well-established technique for delegitimizing results not appreciated by the West, in this case it would be superficial to make such assumptions.

The government responded to the largely peaceful protests with a wave of violent repression that resulted in several victims, dozens of injured and thousands of arrests with reports of ill-treatment and very severe violence against those arrested. To date, this violent behavior of the police seems to have been put aside in the face of the growing protests that are characterized also by a workers’ presence. The use of harsh repression against protests of unprecedented size has proved to be a boomerang for the government, accentuating popular indignation.

The support for the opposition by foreign forces from outside the country cannot be underestimated, but it does not appear to be the main motive for popular protests and workers’ strikes. To date, the government has not offered a peaceful solution to the conflict.

On the one hand, Lukashenko tries to present himself as a victim of NATO, while, on the other, he has given signs of wanting to free himself from the Russian embrace, also considering the purchase of crude oil from other markets. Last February he tried to forge relations with the US administration, inviting Washington’s Secretary of State, the ultra-reactionary and warmonger Mike Pompeo. Moreover, in mid-May, the United States generously sent an oil tanker to Belarus to cover Russia’s cutbacks.

Parallel to the growing aggression towards countries such as Venezuela or Cuba, the attitude of Western governments, particularly the United States, confirms that the main interest of the USA and the European Union is not so much “democracy”, but that of drawing Belarus into the anti-Russian group of countries surrounding Minsk, which include the governments of the Visegrad agreement (Hungary, Poland, the Czech Republic and Slovakia) as well as Lithuania and Ukraine, which have become NATO’s eastward outpost.

In this respect, Belarus has a geographic and geopolitical position that makes it an appetizing booty and a land of open contention between the EU, Russia and the United States. It should not be forgotten that the control of the economy and of the public industrial apparatus of Belarus represents a significant target for the Western capitalist groups, but also for the Russian ones.

We oppose any external intervention and believe the sanctions threatened by the European Union could damage the chances of a democratic process and a positive development of the current crisis. Moreover, the sanctions and words of condemnation of police brutality sharply contrast with the hypocrisy and double standards of the EU towards countries like Turkey, Israel, Egypt or Saudi Arabia. We have also yet to read statements from Brussels condemning the violent repression in France, which cost 11 deaths last year.

Active in the protest movement are also the comrades of the party “A fair world”, member of the Party of the European Left, who have also suffered arrests and to whom we address our solidarity.
From the outset, they have denounced the fact that there were no conditions for free and fair elections in Belarus.

In the wave of mobilizations against Lukashenko, the mobilization of the working class, which still has great weight in Belarus, has played a major role. We have no illusions about this mobilization, because of our growing familiarity in recent decades with the nefarious hegemony of the workers’ movements by nationalist or liberal-democratic oppositions, with neoliberal programs that have then violently affected the living conditions and working rights of the working class. From this point of view, the communicative power of these sectors of the opposition – supported by the European Union and the USA – risks reproducing the same scenario in the event of a possible exit from the scene of Lukashenko.

It is a duty for the forces of the European Left, and in particular for democratic communists, to strengthen ties with the left forces and sectors of the workers’ movement and to support them in the demand for freedom of trade union, association, press and opinion. Contemporary events remind us, once more, of the extreme weakness of our initiatives -and our knowledge – of Eastern Europe.

Workers’ struggles, together with those for democratic development, must not be sacrificed on the altar of the geopolitical strategies that have long been aiming at a policy of expansion towards the East and which could also arouse negative reactions from the Russian Federation itself, linked to Belarus by historical and highly structured relationships and myriad forms of integration. It is clear that plans are underway to “de-communize” and privatize Belarus as in neighboring Poland and Ukraine and, in the future, open the doors to NATO.

Neither the uncritical exaltations of the ongoing mobilization, nor those relating to Lukashenko’s “socialism” and anti-imperialism, seem well founded. The revival of easy Manichean schemes clashes with the reality of ethno-nationalistic and neoliberal forces riding the promises of development through EU membership, as well as with the authoritarian characteristics of Lukashenko’s lengthy mandate.

We are working towards immediately opening a dialogue with the entire spectrum of political and social forces, both regarding the rules that guarantee a free, fair and transparent electoral process, as well as on the announced economic policies and elementary rights of speech, assembly, association and democratic protest.

The PRC-SE calls for an immediate cessation of violence and repression against those who demonstrate peacefully, the release of those arrested and the start of a real dialogue between the government and the various opposition forces.

Only a peaceful and truly inclusive dialogue between Belarusians can resolve the political crisis in the interest of the people, avoiding dangerous foreign interference. We invite the Italian government to act in this sense, given the consolidated good relations between the two countries. We have a negative view on the sanctions announced by the European Union.

We support the legitimate democratic demands of the Belarusian people and the right to self-determine their future.