Support the RMT Strikes! Safety and Jobs before Profit! Renationalise the Railways! 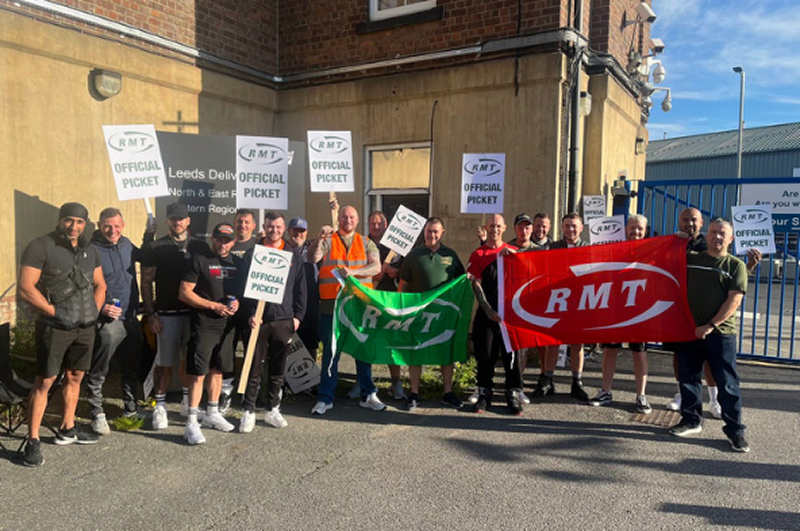 Craig Lewis reports: 80% of train services were axed during the 24-hour RMT strike on Tuesday as 50,000 rail workers took strike action. RMT general secretary Mick Lynch praised the “fantastic” turnout of members and said they had “exceeded expectations in our struggle for job security, defending conditions and a decent pay rise”. Further strikes are planned for Thursday 23 & Saturday 25 June. Pickets were out at stations and other rail facilities across the country. The mood was defiant, confident, and determined to fightback over the growing cost of living crisis. Trade unionists from other unions joined picket lines in solidarity, reflecting the same feeling demonstrated on the large TUC march on Saturday: “Enough is Enough”.

Below is a sample of reports sent in to Left Unity from members around the country: 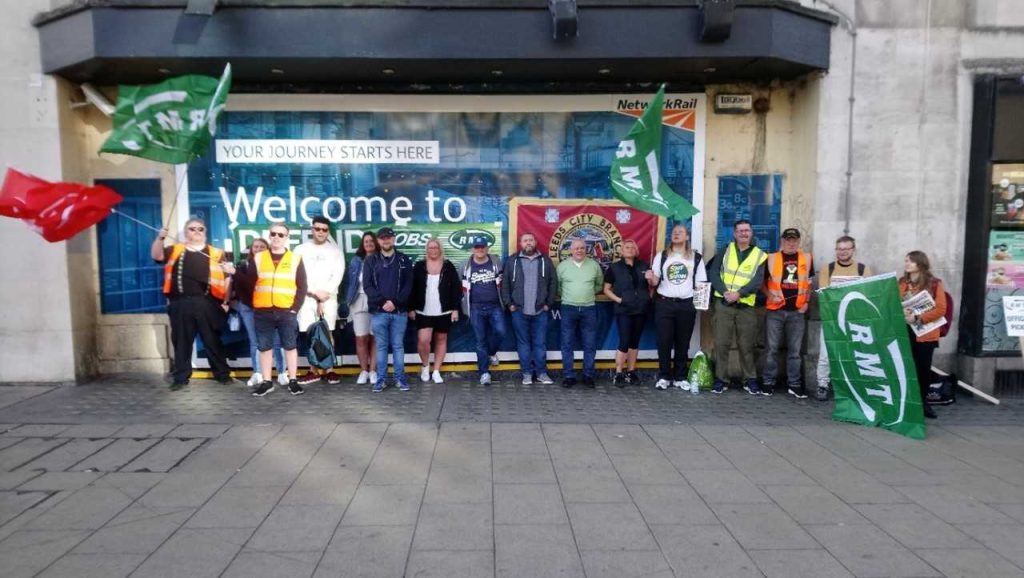 There are thirty on the picket line. Been here an hour. About 10 supporters so far. Members of the RMT picket line in Leeds are striking for so much more than pay. Passenger safety and passenger service is a major concern. Rail guards give passengers a feeling of security. If an issue arises, – sexual harassment, rowdy, or threatening behaviour etc – they are on hand.

On-train, and station staff play a vital role helping people with access arrangements at stations to get on and off the train. The ticket machines are franchised by one company – they sell set price tickets only. Staff in the ticket offices are essential in helping find the cheapest options. Yet the employers and government have targeted all ticket offices for closure. Pay is obviously an issue but not the £60,000 salaries the Tories claim. Many RMT members earn under £30,000. Maintenance and safety critical staff and infrastructure will be cut. Less safe working practices have obvious implications for passengers and workers. Train operator profits are a big issue for strikers. Train operators made £300 million profit last year, train company owners made £949 million and track repair companies made £235 million. Strikers ask the obvious question: “Why can’t they afford to both maintain safe staffing levels, and pay a decent wage increase?” There has been excellent solidarity from other unions. NEU members attended the Leeds picket and also invited a RMT speaker to address their next branch meeting. An Arriva bus striker also spoke on the picket line. If the cuts go ahead our railway will be less reliable as well as less safe, secure, and accessible. 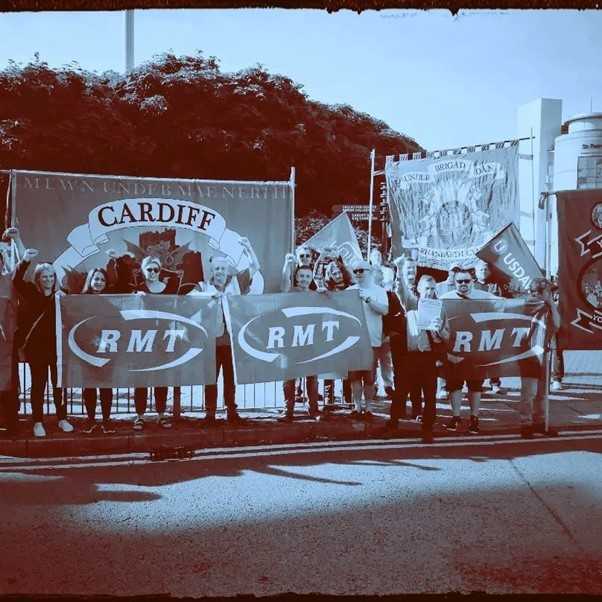 Day 1 of the National Rail Strike. Defiant electric mood on RMT union picket lines at back of Cardiff Central Railway Station. Tons of support from public and other trade unions because everyone knows that all our people this year are heading into battle with the government and employer class to end the cost of living crisis. Every strike is a strike for all of us to shift power and wealth from the billionaire class to the working class. And when working class people in Wales and across the world come together there is nothing that can stop us in the struggle for justice!

There’s a real fighting mood amongst RMT pickets and supporters at Glasgow Central station this morning reflected by RMT regional official Gordon Martin. Referring to Tory threats to facilitate organised scabbing, and impose further restrictions on the right to strike, he said that Johnson had “drawn the battlelines” but members were prepared for “a fight to the finish” if necessary. He said pickets were out at other stations including Motherwell and Edinburgh and called Johnson and Shapps liars for trying to shift the blame for the dispute on to the union.

There is good support here from other unions too, including Unison, Unite and UCU. Even local shoppers and some of the handful of passengers around the station have shown support. Cars and taxis have been hooting in solidarity. The Scottish Labour Party has broken with the Starmer line. Both the current Labour leader, Anas Sarwar and his predecessor, Richard Leonard have attended picket lines this morning.

There will be pickets again at Glasgow Central & Edinburgh Waverley on Thursday and Saturday. 6am to 3pm for Edinburgh, 7am to 3pm for Glasgow.

Video can be seen here. 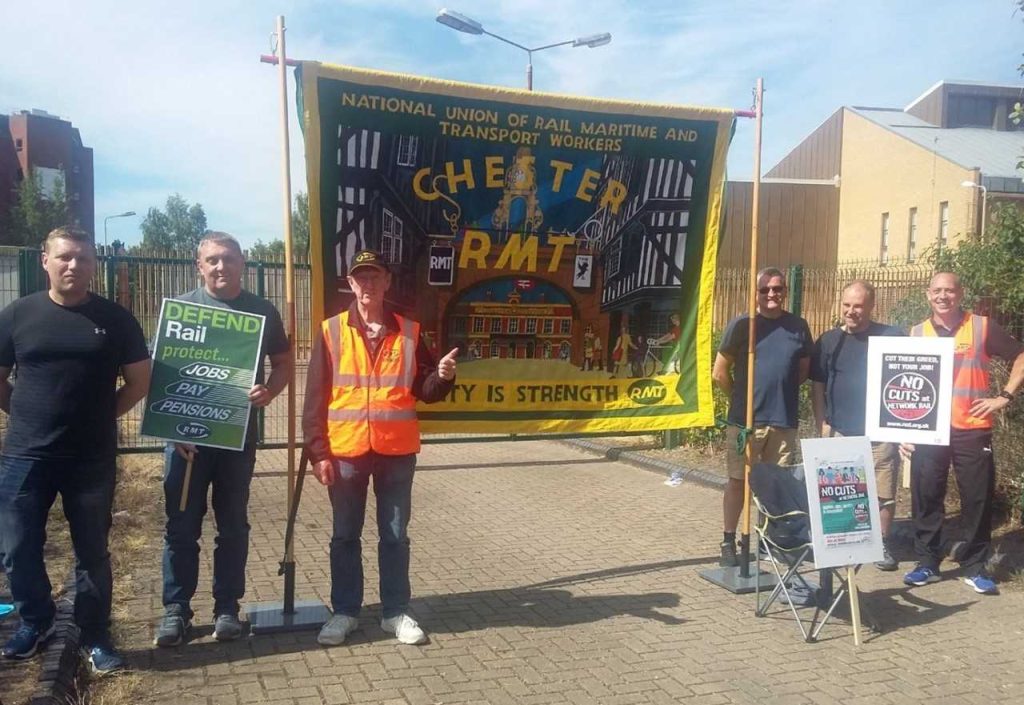 Chester had very good reception and no crossing of the picket line. Crewe as well.

Collective action and solidarity can win

Today’s talks have reportedly broken down, so a second day of strikes look set for tomorrow. Yesterday was a marvellous example of how workers, acting collectively, have the power to challenge the rich and powerful who rule our lives. But it was only a day! The politics behind this dispute are now finely balanced. The Tories have made it clear that they want to wage a class war rather than settle a pay dispute. They are ruthless and have threatened even more draconian restrictions on strikes. They also intend legislation to legitimise replacing strikers with agency workers. It is therefore vitally important that all trade unionists, socialists and activists in community campaigns or social movements show solidarity with the RMT strikers. For some time, the number of small and localised strikes have been growing and worrying the Tories. Now more unions are starting to threaten national strike action. The CWU communication workers union is balloting its members; NEU is likely to ballot for action in the autumn, UCU is already taking action over pay and pensions. Success for the rail strikers would give confidence to other workers beginning to fightback against an unprecedented cost of living crisis, which is none of our making. A fightback that could build into a serious challenge to Johnson’s increasingly authoritarian regime.