“A Shower of Bandits” – That’s how an RMT union activist summed up P&O ferries UK management, and their contractor Clyde Marine Recruitment at a demonstration in Glasgow last Monday. It is the only way to describe an employer that brazenly flouts employment law to sack its entire workforce and sends in security thugs with handcuffs to remove them. An employer that has admitted to breaking both employment and criminal law in its haste to destroy the lives and livelihoods of workers. With such employment practices it’s no surprise that parent company DP World saw a 25% rise in global profits last year to £1bn and paid out over £400m in shareholder dividends. “We pay, they profit” as another activist put it.

Blame the bosses not foreign workers 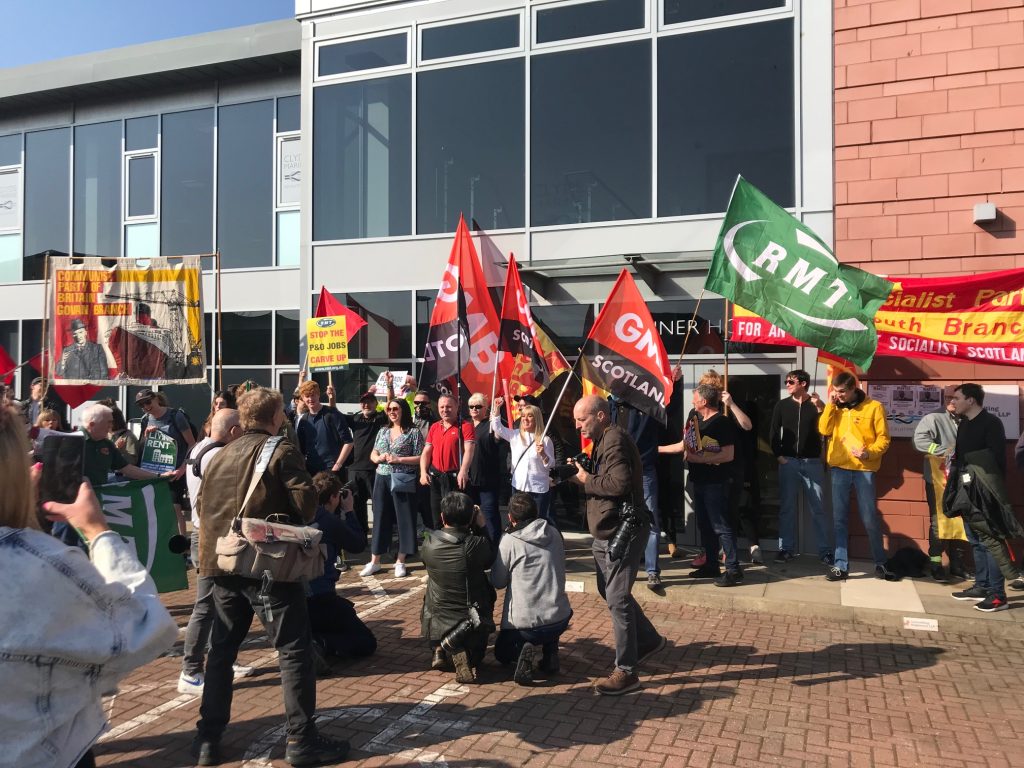 Over 200 demonstrators picketed the agency’s premises to demand justice and reinstatement for the 800 sacked P&O workers. Speakers from other unions, political parties and local campaign groups spoke in solidarity with the sacked ferry staff. Victimised USDAW steward, Richie Venton, called the action of P&O management “the worst case of capitalist thuggery since Ronald Regan arrested the air traffic control strikers in 1981”. Like many of the speakers he demanded re-instatement of all the sacked workers on their original terms and conditions and called for nationalisation of P&O if the company refuses to reverse it decision. He urged workers to blame the bosses not foreign staff recruited by the agency. P&O tactics are aimed at sowing division. Our collective strength demands unity between all workers. We must not be diverted by xenophobia and racism or the pernicious notion of British jobs for British workers. Other speakers also condemned the sackings and warned that if P&O management got away with breaking the law to cut wage costs, other employers would quickly follow suit in a race to the bottom. “This is an attack on the whole working class and trade union movement” said Monica Lennon, Labour MSP for Central Scotland.

Using the law is no solution

There is now a danger that the dispute is side-tracked into legal channels particularly as the company has set a deadline of this Thursday (31 March) for workers to individually accept their severance package and sign non-disclosure agreements. With the sacked workers gone the momentum could easily go out of the dispute. Relying on Gant Shapps’s threat to bring in legislation that will: “block the outcome that P&O Ferries has pursued, including paying workers less than the minimum wage” will do nothing to win back the workers’ jobs and conditions, and very little to penalise the company. This is Tory double-speak. The average “unlimited fine” for failure to inform the authorities about planned redundancies is just over £10,500. Only last year the Tories rejected a proposed bill to outlaw fire and rehire practices. In the summer Shapps gave the go ahead for Irish Ferries to run a new service out of Dover using casual staff on minimum wage. Tory crocodile tears and more toothless legislation will be no deterrent to a company making profits of £1bn!

Collective action and solidarity across the trade union movement can win 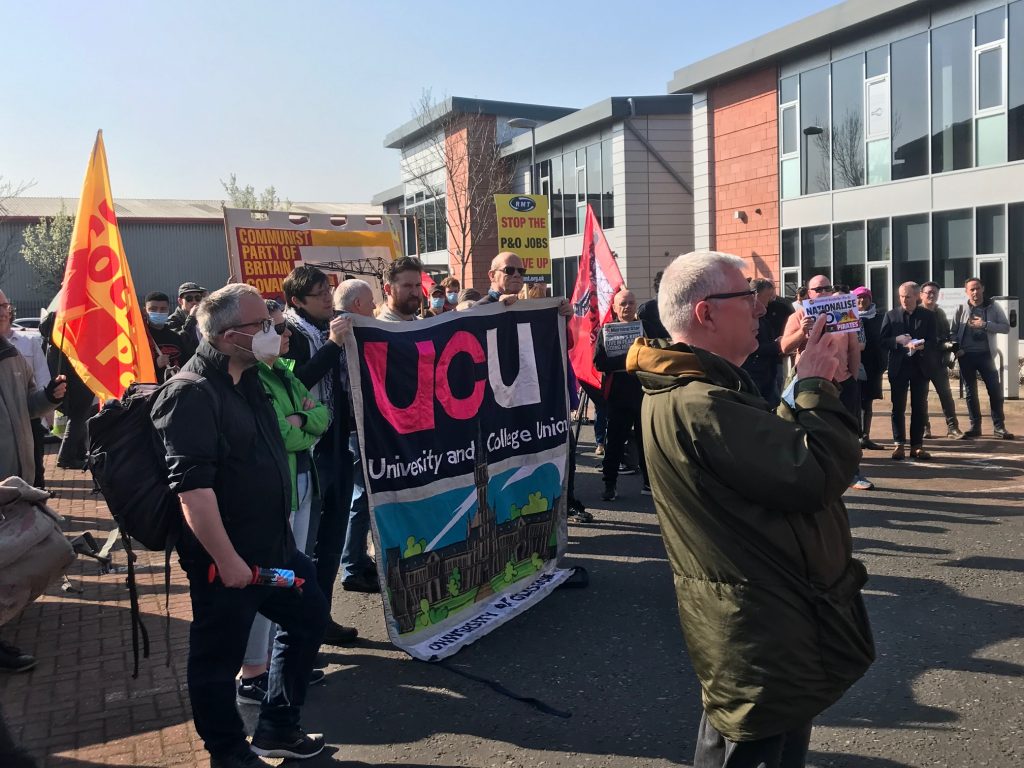 So far, the RMT leadership and union leaderships generally have placed too much reliance on political lobbying and legal action by government. They have failed to co-ordinate local action across the country. But radical direct action can still win. It is not too late to force P&O to withdraw the sackings. At the Glasgow rally, activists from Better than Zero explained how employers in Scotland’s hospitality sector tried to fire and rehire 20,000 employees early in the pandemic. But strike action backed by effective solidarity initiatives organised by local activists had forced employers to backtrack and reinstate many of the workers involved. Charlie, an EIS rep, told how FE colleges had sacked lecturers and rehired them as instructors on lower pay and less favourable conditions. After a campaign of strikes and other industrial action the staff had now all been reinstated on lecturer terms and conditions. The key had been maintaining unity between both lecturers and instructors to counter employer attempts to play one group off against another.

Solidarity can go beyond the organised trade union movement. Ian Ferguson of the “Stop the Closures” campaign, that has successfully resisted Glasgow City Council attempts to close 80 libraries and other community amenities, made the link between employer attacks on pay and conditions and cuts to social amenities in working class communities. They are part of the same logic which seeks to force workers to pay for the crisis whilst sustaining the profits of capital.

Justice for the 800 sacked workers

All trade unionists and community activists must demand justice for the P&O workers and help build more action in their support. In Scotland the Glasgow People’s Assembly has produced a leaflet linking the cost of living crisis to the employer hire and fire offensive. It has called a demonstration this Saturday (2 April) with the slogans: “Cost of Living Crisis: We Can’t Pay. Justice for the 800 P&O Workers”. The RMT is planning a “blockade” of Cairnryan port the following weekend and hopes to organise buses from around Scotland. There will be other rallies, marches and blockades organised locally. Left Unity members are urged to let us know if anything is planned in your area. If P&O get away with this anyone could be next.

Reverse the sackings and full re-instatement

Blame the bosses not foreign workers

Collective action and solidarity can win