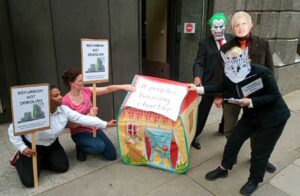 Doug Thorpe writes: Housing and environmental campaigners chose the HQ of property developers Delancey as the backdrop to launch their People’s Housing Charter (see below) in opposition to the government’s proposed new legislation on planning.

Boris Johnson and Peter John (former leader of Southwark Council who now works as a lobbyist for developers) were some of the politicians depicted at the launch, hobnobbing with developers in ‘fat cat’ masks in a piece of street theatre symbolising the struggle between those who see property as investment versus those who need housing as a home.

The charter has been developed in online discussions involving housing and environment campaigners in an attempt to find demands that will solve the housing crisis without causing climate damage. It is supported by Radical Housing Network,

Bill Perry, from the Radical Housing Network explained “Delancey, which was founded by the Tory donor Jamie Ritblat, epitomises the cosy links between politicians and developers which is driving Government policy. As well as the corruption allegations about Lord Edward Lister who worked for Delancey when he was also chair of Homes England and granted them multi-million pound government loans, Lister was a key government advisor when the new legislation on planning was being drawn up.”

‘It’s obvious that Delancey’s massive donations to the Tory party is money well spent when you see the new planning legislation. It’s all about taking away obstacles to developers, particularly democratic scrutiny of their plans at a local level”

Campaigners insist that the action we need now is action to address the chronic shortage of genuinely affordable homes not legislation to promote more luxury apartments such as the planned development by Delancey in Elephant and Castle. These new build developments are also fuelling the climate crisis, with unsustainable building methods and materials such as concrete, steel and glass. Construction materials account for 11% of greenhouse gas emissions and the built environment in total is responsible for 40% of all emissions in the UK.

Doug Thorpe of Left Unity and a housing campaigner in London, said “rather than continuing with business as usual, funnelling money to the developers and their carbon intensive high rises, the government should be promoting a new green economy in housing, geared to people’s needs and addressing the climate crisis”

Sabine Mairey from the Central Hill Estate in Lambeth, where the council plans to demolish their homes and build predominantly private apartments in their place, said “there is a climate emergency and housing crisis. There should be government money to refurbish homes like ours, which is much less damaging to the environment than building new blocks and would retain council housing for the next generation.”

Chris Bailey from Action on Empty Homes said “Action on Empty Homes back the People’s Housing Charter for housing and climate action. We want to see empty homes brought into use and developers building to meet housing need. Current laissez faire approaches are delivering more empty homes, more second homes and more homeless families – it is time this stopped.”

The UK’s housing ‘crisis’ is the result of decades of government failure to meet people’s housing needs, while promoting ever greater inequality in access to land and property.

On any night in one of the richest countries in the world, more than 10,000 homeless families are living in a B&B while at least another 2500 people are sleeping on the street. These statistics are unlikely to be disconnected from the fact that the number of people in the notoriously insecure private rented sector has doubled in the last 20 years to nearly 20% of all households.

This lack of secure affordable homes is in large part the result of a mis-management of resources rather than lack of housing. Property speculators can profit from leaving hundreds of thousands of properties empty in the UK, and tax incentives promote the ownership of second-homes and AirB&Bs that divert hundreds of thousands more properties from becoming much needed homes.

Unequal access to housing has been exacerbated over recent decades by the transfer of housing and house-building from the public sector to private finance, and houses are increasingly seen as an investment vehicle rather than a fundamental human right. The failure of the ‘free market’’ to deliver the affordable houses that people need has also been facilitated by a lack of real local democracy over planning and development.

The government’s plan to further loosen democratic control over the planning process needs to be seen in this context of a country with extremely uneven distribution of wealth and power, racial inequality, and an unwillingness to tackle the biggest threat of all, which is the climate emergency.

Buildings produce no less than 40 percent of the UK’s total carbon emissions, and construction produces 63 percent of the UK’s 200million tonnes of rubbish a year. There is no way to reduce carbon emissions without radically overhauling the buildings we live in and what we build – but so long as there is profit in polluting there will be no change of course without drastic and dramatic government action. First and foremost in order to make far-reaching and rapid decisions about how we use land then we need to own it – so the sale of public land has to stop and the buying of private land for community use has to start.

In the process of implementing these changes we could also create a much richer physical and social environment that enhances all our lives.

We call on local and national governments to adopt the following principles:

To achieve these principles we need to adopt the following measures:

2. Refurbish and repurpose – rather than demolish – existing buildings, to provide homes or to revitalise empty high streets through community use.

3. Where new buildings are necessary they must be built with sustainable materials and be truly carbon neutral (without ‘carbon offset’ payments).

4. Introduce and enforce rent controls and secure tenancies for all renters.

6. Retrofit all buildings to the highest environmental and safety standards including insulation and affordable renewable energy schemes.

7. Introduce participatory democracy in all areas of planning and control over our homes. This could include planning juries, citizen assemblies, tenant associations and tenant co- operatives.