2022 saw more strike days lost than any year since 2011. The strike wave looks set to continue in 2023 with union members across the public sector joining or planning more action. Beyond the headline national disputes, hundreds of local strikes have been going on since the summer. Many registering significant successes, like the Dockers in Liverpool and cleansing department workers in Glasgow and Edinburgh. Trade union members are learning from each other that collective action wins against even the most intransigent employers. 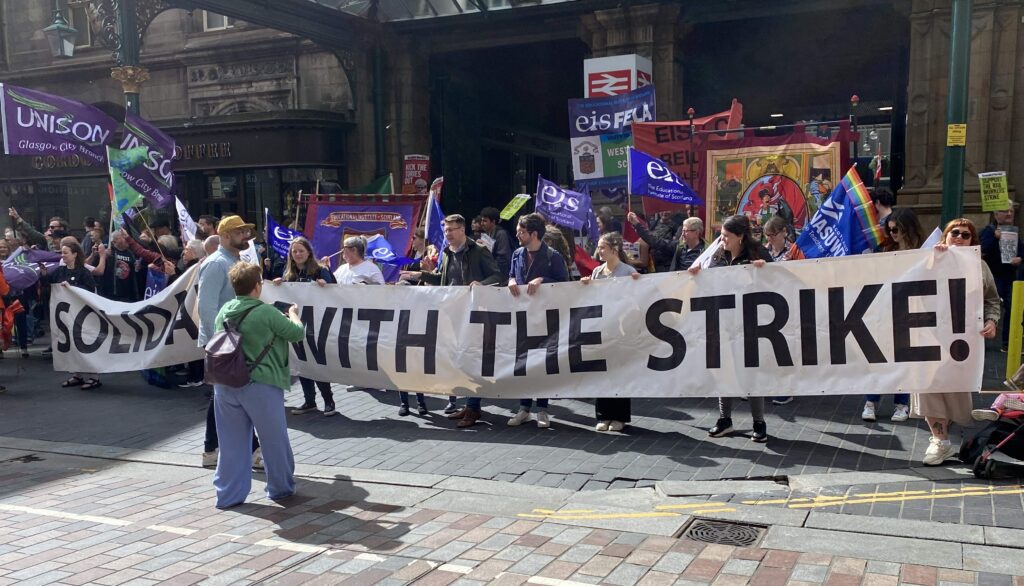 Resistance on this scale does not fit the decades long Tory narrative of unions tamed by Thatcher. The Tories are rattled. But Sunak dare not be seen to back down or his fractious government will go the way of the last 4 Tory administrations. Rather than seek to resolve disputes and restore decent public services, he has consciously chosen to go on the offensive. Vile media campaigns against rail workers, posties, nurses, and other public sector workers have so far failed to turn public opinion against the strikes. Anyone visiting picket lines over the last couple of weeks will have seen first-hand the level of public support; unsurprising when everyday experience speaks to the existential crisis in our health and other key services, and to the vital role many “frontline workers” continue to play during the Covid pandemic.

Trade Unionism and Democracy under Threat

Sunak has now introduced new anti-strike legislation that goes way beyond existing UK trade union laws – already the most restrictive in Europe. Effectively the new bill, announced last week, removes the right to strike for selected union members chosen by the employer to deliver “minimum service requirements”. Originally it was to apply only to rail workers, but the scope has been broadened to cover education, health, fire and “border security”. Unions can be sued if they do not ensure designated workers break strikes even following a lawful ballot. Workers who refuse to comply can be summarily dismissed with no right to claim unfair dismissal. The bill contains sweeping “Henry VIII powers” allowing other sectors to be included via secondary legislation whenever the government decides and without further parliamentary scrutiny.

The government claims that the law guarantees minimum safety levels for staff and public and is no different to laws in other European countries such as France, Spain, and Germany. This is nonsense. Unions have always negotiated “life and limb” cover in key sectors; just as ambulance workers have done recently. It is total hypocrisy coming from a party that has presided over life threatening levels of understaffing in the NHS and social care; and is forcing job cuts on our railways that will compromise passenger safety both within stations and on trains. It is true that other European countries have minimum service arrangements in key sectors, but these are established by collective agreements. In so far as there are regulations, these simply set out a framework for these agreements. In contrast Sunak’s bill empowers employers and ministers to arbitrarily determine the level of cover required and select the specific staff instructed to work. This directly contravenes International Labour

Organisation conventions (to which the UK is a signatory). The ILO deems such arbitrary government powers to be an infringement on the right to strike and on freedom of association. Not only are they an existential threat to trade unionism, they remove basic civil and democratic rights. Along with the restrictions already imposed on the right to protest these laws mark a further slide towards authoritarianism. RMT leader Mick Lynch was right to argue that if workers are denied the right to strike they have been “conscripted” into the Labour force; the hallmark of totalitarianism.

There has been some fiery rhetoric from many union leaders, but so far their response to the legislation has been limited to say the least. The TUC is co-ordinating legal challenges to the bill and has launched a petition to defend the right to strike. It has recently called a day of action on February 1st, and is urging all union members, community campaigns and “members of the public” to join rallies and protests around the country that day. So far there are few further details. All trade unionists and activists should of course support and help build it. But rallies, marches and petitions will not be enough. Nor will handing the future of the trade union movement to high court judges! Or, for that matter, waiting for a future Labour government to make good on Starmer’s promise to repeal the law. His reluctance to support the strikes has been shameful and gives little confidence that he will deliver even if elected.

Union leaders need to up the ante and turn the economic struggles into mass political defiance. The levels of militancy, solidarity and public understanding for the strikes are a sound basis for unions to mount direct action against Sunak’s law. Some unions have discussed co-ordinating strikes on Feb 1. This would be a start. Over half a million workers have live strike ballots and another 600,000 teachers in England and Wales have a ballot result pending. All these unions could easily co-ordinate strikes on Feb 1. It would not even be unprecedented – 2m public sector workers co-ordinated a one day strike over pensions in 2011. In Scotland posties, Lecturers and Teachers have already co-ordinated their strikes. They visited each other’s picket lines and held a joint rally in Glasgow just before Christmas.

Activists must call for maximum coordination of the strikes, but to defeat the law and actually start winning national disputes we need also to demand that union leaders escalate the action. Intermittent time limited strikes have given an important boost to trade union militancy and rebuilt awareness of workers collective power. But it’s a strategy that has also allowed employers and the government to play a waiting game. No major union has so far won their national dispute. Ultimately unless the strikes are escalated significantly to indefinite stoppages if necessary, some unions will be bought off with limited concessions and others targeted with the new powers. Eventually the resistance will fragment, workers will start to lose confidence and momentum will dissipate.

Unfortunately, there is leadership reluctance to either co-ordinate or escalate the strikes on any significant scale for fear of losing public support. RCN leader, Pat Cullen, rejected nurses’ involvement in co-ordinated strikes: “Our days of action and future planning is based on what is best for nursing”. Sectionalism and leadership caution like this is an inherent feature of the trade union bureaucracy of course. It stems from the contradictory nature of trade unionism itself. Unless it is challenged, the conservatism of even the best trade union leaders can become a major obstacle at times like this. Treating these laws as separate from the pay struggles is a massive mistake. The Tories intend to use them to divide workers and break the strikes. Failure to use workers’ collective power to defeat the laws simply squanders the growing militancy and solidarity evident since the summer. It inevitably undermines the immediate pay struggles; not only of nurses, but of all workers.

Pushing union leaders to co-ordinate and escalate the strikes will not be straightforward. It will require an effective grassroots rank and file strategy. Historically rank and file organisation amongst union members outside official union structures has always been necessary to build the kind of mass political strikes we need to defeat the new laws. This does not mean adopting a futile ultra-left strategy of by-passing officials, denouncing their conservatism or even worse forming breakaway unions. It means trying to build up the kind of confident and combative networks within and across unions that encourage direct membership participation in all aspects of disputes including negotiations. Organisation that allows members to control strikes at local level through democratically organised strike committees; that understands how to use union structures to focus membership pressure on officials to prevent premature compromises and concessions; that can build solidarity across unions and with community campaigns. And ultimately a rank and file organisation that can act autonomously of the officials if necessary. Such organisations have existed in the past at times of heightened industrial struggle. They were effectively eradicated during 40 years of trade union decline following the Thatcher period. But they have begun to re-emerge in some unions and localities in the current strike wave. Activists will have to do all we can to strengthen rank and file organisation if we are to defy and defeat the new laws. We can start by building from the below for February 1st:

· Arrange workplace or community group meetings to discuss participation in rallies and protests on the day.