NHS Not for Sale: Leeds Rally against Privatisation of the NHS

Nick Jones reports: Hundreds marched through Leeds at the weekend to protest about NHS underfunding, cuts in services and privatisation.

The march was called by Keep Our NHS Public Leeds with the support of other health campaigns and trade unions across Yorkshire. Regional TUC, GMB, UNITE, UNISON, RMT, FBU, NUM, NEU, NASUWT, CWU, UCU and Trades Councils across Yorkshire.

People are tired of being misled. It is no surprise that Boris Johnson’s claims to build 40 new hospitals have been referred to the National Audit Office. There is no sign of the money or the hospitals. A study by the medical journal the Lancet revelled that 557 avoidable deaths have been linked to NHS outsourcing of services to the private sector[1] 30th June 2022.

We are concerned that 2.2% efficiency savings and surging inflation will jeopardise the Leeds Children’s Hospital and ambulatory adult care wing project. 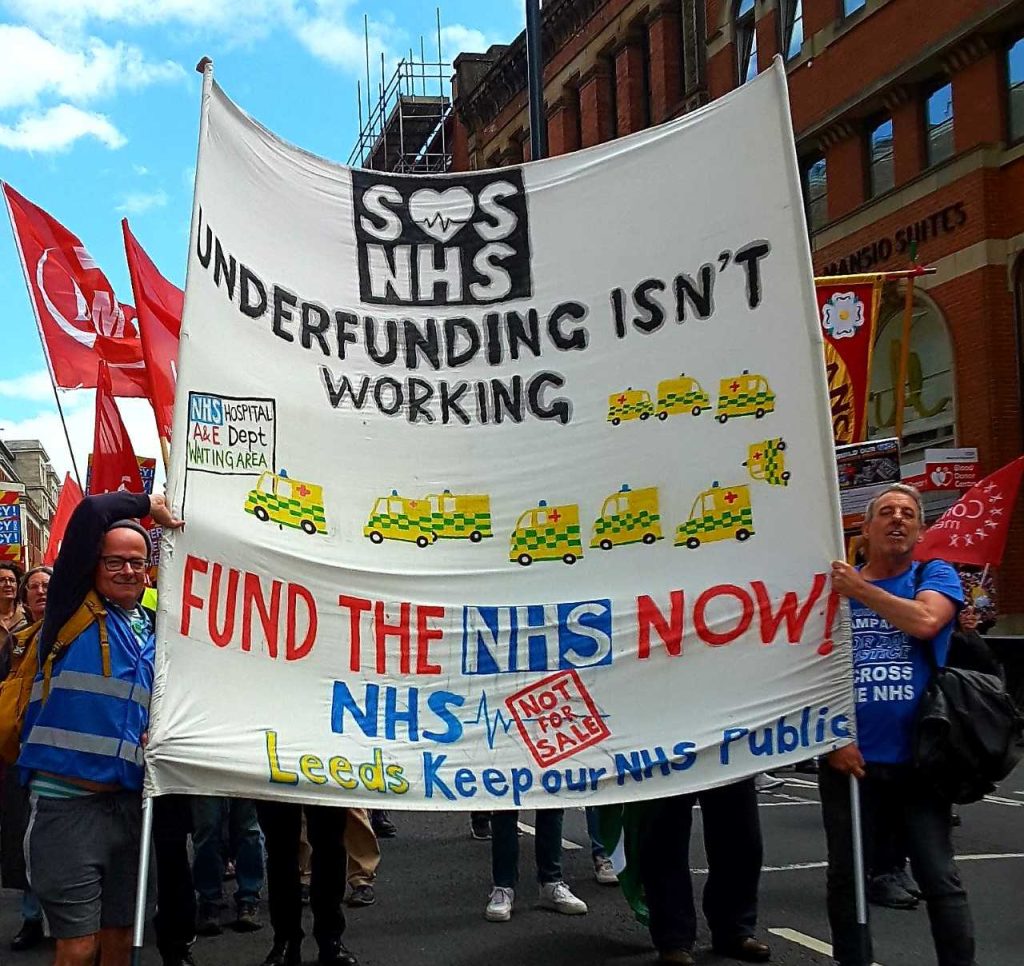 The original estimate for the project was £600 million and the Leeds Teaching Hospitals Trust has been required to resubmit revised plans that will cost no more than £400 million.

It is clear that the NHS needs urgent assistance:

· £20 billion injection of emergency funding as a down payment for what is needed- we oppose the 2.2% cuts imposed by Rishi Sunak’s March budget.

· Ensure that investment is channelled into reopening, rebuilding and expanding the NHS and its capacity to meet the challenges ahead. Not funding the private sector that is  profiting from ill health.

· A firm commitment to cover the costs for the 48 promised new hospitals including the Children’s hospital in Leeds.

Felicity Dowling from the Liverpool Women’s Hospital campaign got rousing applause. We publish her speech in full below.

“We have to fight for maternity care.

Let’s fight to win back our NHS and fight like hell for Maternity There is a crisis in maternity care in England. It is well documented, with report after report from Ockendon, Morecombe Bay Nottingham and more. The Independent newspaper did a webinar on the problems. A parliamentary report has been published. Charities are making it a priority. In February, Midwives demonstrated across the county. Midwives are leaving the service in numbers.

The Government though, is not addressing the problem. They stubbornly refuse to fund maternity at a safe level. The new reorganisation into the ICS boards has midwifery as a subsidiary of nursing, not a full component of the system.

Many women report problems with the service as they give birth. The service cannot provide 1 to 1 care in active labour. Home births can be cancelled (not the birth, the midwife coming to the house). Poor and BAME mothers are most at risk. Each delivery suite should have senior midwife without a case load available to help and to advise in complex cases. New midwives require a more experienced midwife with a reduced case load to assist them as they learn the job. This is often unavailable.

Women in labour need a calm and safe environment for the birthing hormones to flow normally. There is a shortage too of obstetricians, so using caesareans more often is not a solution. Midwives are leaving because of workload, management problems, and because the system is seen to be unsafe. Incredibly, those who attend to us in our most private moments are not allowed to speak, reporting problems to the public.

The Government proclaimed the benefits of Continuity of Carer, which would be a great system if there were 50% more midwives, but was implemented by Trusts without the staff numbers and has caused real problems.

Donna Ockendon called for a halt to C o C until staffing improves.

The Royal College of Midwifery reported that:

“Every month we are seeing the situation in our maternity service getting worse and worse as midwife numbers fall and fall and then fall further still. We have report after report nationally and locally – including the recent Ockenden Report – drawing clear lines between safety and staffing levels. Despite this we still see the Government failing to react and failing to invest adequately in maternity services.”

Earlier this year midwives came out onto the streets in protest, and Donna Ockendon reported, but little has changed.

‘For the 2022 campaign, the All Party Parliamentary Group on Baby Loss and the APPG on Maternity are joining forces to push for urgent action on the maternity staffing crisis.

The call will be open until Wednesday 3rd August.

There is urgent work to be done to tackle the current maternity staffing crisis, and we hope that this call for evidence and the safe staffing campaign can help progress this.

If you have any questions or queries, please get in touch with me or email maternity.appg@rcm.org.uk. I’ll also be contacting you.’

This government does not care. The government do not even listen to parliamentary reports. Some of their cronies see the opportunities for establishing more private practice in maternity. That may make money, but it will not be the universal service we need. It cannot be the great research service the NHS has become. Systems like MBRRACE, which investigate maternal deaths, could not work in a fragmented private service, neither could a private service offer the obstetric back up provided by the NHS for all home births. Maternity care in the US  has dreadful outcomes

We need universal comprehensive care. Failing to provide universal comprehensive care, free at the point of need costs lives. According to the 2019 MBRRACE-UK confidential inquiry into maternal deaths, three women were found to have died between 2015 and 2017 who may have been reluctant to access maternity care due to fears about charging, and impact on their immigration status. The Guardian reported that some migrant women were charged £14,000 for giving birth in the NHS, and some were charged illegally. Maternity Action has done excellent work on this topic, as have Docs not Cops, but the government does not listen. Newspapers like the Guardian and the Independent have reported in detail. Aims has reported in detail.

If the government will not listen, the unions, the labour movement, and the communities, will have to take up the challenge of making it unbearable for the government to continue to neglect the service.

Midwives are leaving the service worn out and angry. Let’s show them that they are valued, and that we are fighting for a better deal for mums, babies, midwives, and all maternity staff.

We all use the maternity service at some point in our lives, if only when we are born. All trade union members have been born, many are mothers or fathers, others are grandparents, aunts, uncles and other family. We must make sure the public know of the situation, so they too pressure the Government. The government has implemented a decade of austerity and cuts in the NHS. It has just passed laws that permit huge changes in the NHS, allowing health corporations from the US a say in how the NHS runs. They are happy to run it down to make this move towards privatisation more palatable They have a dreadful record on adolescent mental health services, on the mental health service, on dentistry, the GP service, and more. We cannot let the Government and the upper echelons of the NHS wreck maternity as well. We must protect the babies, and their mothers who are giving them birth from this government. Injury at birth, to mother or baby, has a lifelong effect.

Babies have but one chance at birth. Let us make the government make it safe.”

[1] Outsourcing health-care services to the private sector and treatable mortality rates in England, 2013–20: an observational study of NHS privatisation – The Lancet Public Health