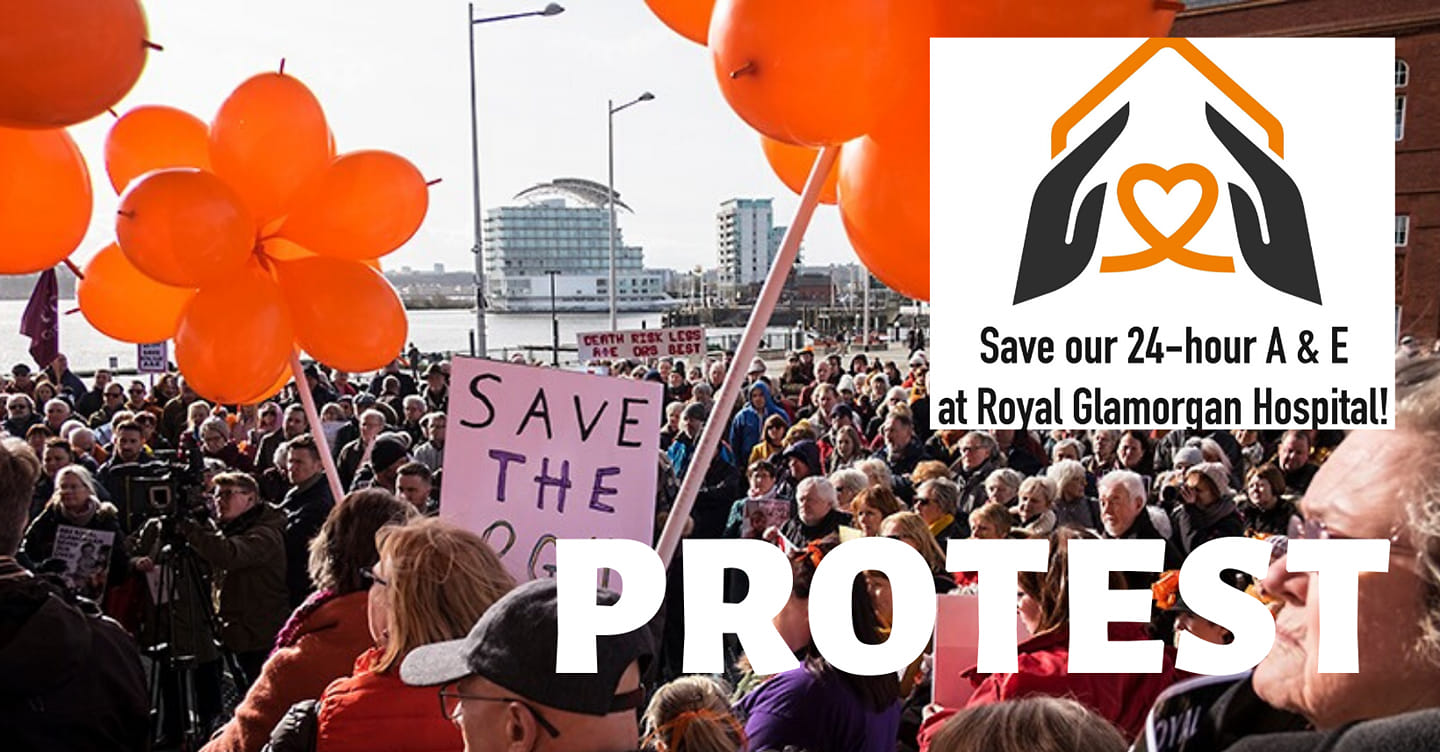 The save Royal Glamorgan A&E (SRGAE) campaign, which was initiated by the People’s Assembly RCT/Bridgend group, has had a tremendous victory as the local Cwm Taf Health Board has withdrawn its proposals to downgrade the current 24/7 consultant led service to one of minor injuries or just day time cover, guaranteeing the current provision ‘a long term future’.

The proposals were part of an austerity driven rationalisation plan dating back to 2014 and were slowly being implemented by running down the current provision by not replacing key staff.

The victory is totally down to what can only be described as an uprising by the people and communities of the Rhondda, Cynon, and Ely valleys in central South Wales. 10,000s

were involved through online groups, signing and collection signatures and attending demonstrations. The campaign, by being completely open and accountable to all, was able to help give voice to people’s anger, sustain the momentum and help involve the trade unions and cross party political support so that like a jigsaw, all the pieces fell into place.

This was our earlier report written during the campaign and has stood the test of time.

“The Royal Glamorgan Hospital (RGH) sits at the bottom of the Rhondda and Ely Valleys in South Wales. It is also near huge new housing developments along the M4 corridor, with up to 10,000 new and planned housing. Attendances at the RGH A&E have steadily grown over the last five years and now stand at 64,000 per year, making it a medium sized provision according to the Royal College of Emergency Medicine. The increased demand is in part driven by the demographics of a new young population and an aging one. Also, a major factor is the increasing difficulty people are experiencing in accessing primary care through GPs so increasingly the local A&E is becoming the first stop provision of the NHS ‘free at the point of need’.

Many of these factors will be recognised by people across the UK. You will also recognise the driver of the current crisis: the cumulative effects of over 10 years of austerity cuts. We and the People’s Assembly Wales have researched and documented the impact these cuts have had on the Welsh NHS. In the case of the RGH A&E these cuts came to a crisis point over this Christmas when the required support from consultants and doctors dropped to unsafe levels and patients had to be transferred to other emergency departments.

The reason for this decline of the service to such a critical point, was the local Cwm Taf Morgannwg University Health Board slavishly implementing, over the last six years, a rationalisation programme with the other four local health boards called the South Wales Programme (SWP). This was imposed against massive local opposition in 2014 at the height of Wales NHS cuts and agreed to a downgrading of the RGH A&E department from the current 24/7 consultant led service. Over the last six years the A&E has been gradually run down by not replacing consultants as they leave and increasingly relying on locum doctors. Clearly the intention was to reach the crisis point and then use safety as the argument to implement the downgrading.

The following week a campaign was organised at an open meeting attended by around 80 people which agreed a campaign aim of retaining a ‘permanent 24-hour consultant led service at the RGH’. Officers were elected / volunteered and a lunchtime demonstration was agreed to be held at the Senedd (Welsh Assembly) on the following Wednesday. By the time Wednesday came motions and amendments supporting the campaign aim had been tabled by MSs from different parties and the demonstration had about 700 supporters decked out in brilliant orange, which was now the campaign colours. The Senedd voted overwhelmingly to support the campaign aim with the Welsh Government abstaining. A further open meeting and demonstration at a Health Board meeting has been held since then and the campaign has written to Vaughan Gething MS the Welsh Minister for Health requesting that in view of the Senedd vote and the Health Board trying to now recruit the required consultants and doctors as a result of the campaign, he should break with the SWP and support our campaign aim, helping the recruitment drive. We await a response.

Politically this is an extremely important fight against austerity. Across the UK A&E departments have been downgraded and closed as part of implementing the cuts. This is at a time when, due to cuts in primary care, A&E departments are being looked upon as the local access points to the NHS. Many people involved in the campaign have voiced their concern that we have lost ‘everything’ but this is a cut too far.

However, whilst supporting the campaign, all parties represented in the Senedd go out of their way to deny the downgrading proposal is anything to do with austerity! The reason is clear: they all played a role in its implementation. The Tories and Liberals made the cuts as the coalition; Labour Welsh Governments implemented them arguing we now live in ‘hard times’ and have to do our best; Plaid abstained from voting on budgets to let the cuts go though. So they get themselves in a mess trying to blame each other for ‘mismanagement’ or, rightly saying the SWP has been overtaken by demographic events, ignoring the real causes rooted in Tory austerity by finding local arguments which run the risk of pushing the austerity issues onto someone else.

The very real danger in all of this for socialists is that by ignoring the austerity argument the UK Tory government has been let off the hook allowing them in turn to blame the cuts on a Labour led Welsh Government. The Labour Left in Wales has helped to open this door by not challenging the ‘we have to live in hard times’ argument which was first proposed by the current first Minister Mark Drakeford in 2013! Worse, by not pinning the problem very clearly on the financial crisis and the following austerity cuts, it has allowed the right space to try to influence the causes of the cuts being located in Labour, mismanagement and waste, even to the extent of proposing the anti-democratic move of winding up devolution and the Assembly and the money thus saved being used to keep open RGH A&E. The magnitude of the sums of money involved make this a nonsense argument, but it does not prevent it gaining traction given the vacuum on the Labour Left.

As members of Left Unity, together with supporters of the People’s Assembly, we have had to fight hard to try to ensure that the anti austerity argument is at the core of the reason for the proposed downgrading and a win in this campaign, will be a win for everyone fighting austerity in Wales and the UK.  The reality is that we are one voice among many and the fight is politically very raw. Thankfully, we have kept Left Unity going and with People’s Assembly supporters are able not only to directly help build the campaign but also sustain the socialist anti austerity arguments within it.”

We now move on to save our RCT council care homes from closing.