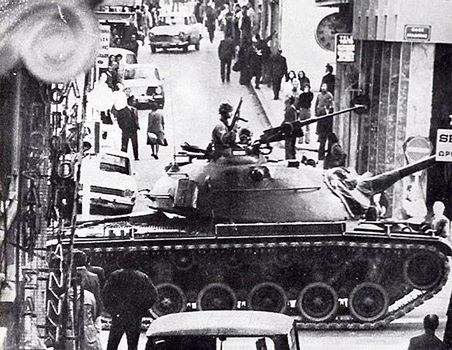 On Friday 28 April, almost 100 activists and veterans gathered at the Unite the Union London headquarters to remember the events 50 years ago when Greek democracy was again overturned by a ruthless military junta. The colonels brought tanks on to the streets of Athens to prevent elections which looked certain to produce a government of Left parties led by George Papandreou.

Organised by the Greece Solidarity Campaign, Anti-Fascist Action for Greece (AAfG), and people who had occupied the London Greek Embassy on 28 April 1967, the event was welcomed by UNITE Acting General Secretary, Gail Cartmail. those present heard from veteran British activists who had occupied the Greek Embassy to protest against the coup in 1967. Several speakers talked of their experiences in Greece at the time.

Isidoros Diakides of GSC spoke of the historical background to the coup where following the brutal civil war after the Second World War a fledgling Greek democracy had suffered western imperial rule with the re-imposition of the monarchy. A succession of right wing governments had ruled from 1949 until the 1960s. Leftist George Papandreou had won the general election in the early 1960s only to find he was prime minister in name only. The palace made all the key decisions. It was during this period that the ‘deep’ or ‘shadow’ state within which the military and police were a key components plotted to undermine the emergence of democracy in Greece. The film Z brilliantly captured this period of Greek history.

Mihalis Yianneskis of AAFG read a statement from a leading activist of the student movement against the Greek junta. In 1973, students occupied Athens University for three days before police raided the building and arrested hundreds of students. Thousands of activists were arrested in the months following the coup with many held in prison and tortured. He had tried to flee the country in 1973 but was stopped and had his passport confiscated. Like many other young people, he was drafted into the army. When the polytechnic students rose up in 1973, the peaceful uprising was brutally crushed with many deaths. This day in November is now a school holiday in Greece. Action had also been taken in London on 28 April 1967.

Action had also been taken in London on 28 April 1967. Michael Randle one of the almost 100 students and Committee of 100 (anti-nuclear bomb) activists, explained how they had taken staff by surprise and peacefully gained access to the embassy. It was later police action that caused some damage. Most of the protesters were later released after a few nights in gaol without charge or with a fine. Three including Randle were given prison sentences of between six to 15 months.

Paul Mackney, chairing the meeting, called for all present to stand in silence in memory of Lambrakis the deputy who was killed before the coup in the years of repression after the so-called civil war; all those in incarcerated, tortured and killed in prison after the coup – the communists, left-wingers, trade unionists, youth activists, musicians and artists; Those on the prison islands Makronisos, Gyaros, Gioura and some inhabited islands such as Leros; Alexandros Panagoulis, in solitary confinement and drutally tortured after attempting to assassinate Papadopoulos; Kostas Gorgakis who set fire to himself in Italy on 19 September 1970; the dozens of students who were killed after the Polytechnic uprising on 17 November 1973; those who lost their jobs or were driven into exile; and those who died in Cyprus in July 1974 after the colonels’ bungled coup d’etat and the Turkish invasion. The meeting also acknowledged those who organised resistance at home and abroad – for us most memorably Melina Mercouri and Mikis Theodorakis; the acts of resistance small and large; the statements of rebellion in the streets of Athens at Papandreou’s funeral on 3 November 1969 and George Seferis’ funeral on 20 September 1971 and their burial in the First Cemetery of Athens; the bravery of the officers and crew of the Velos who mutinied against the mutinous regime. “For you, beloved comrades, the fight will go on.”

Marina Prentoulis [below] who was born during the military occupation and has always been suspicious, like many Greeks, of the police. She spoke of how the police had referred to Greek democrats and socialists as animals. She called for unity in the face of renewed fascist threats today from Golden Dawn and the deep state. 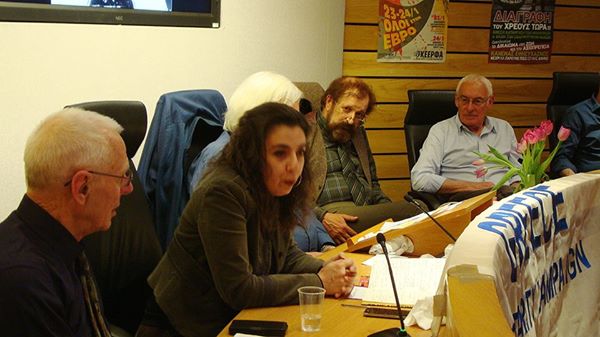 Two Greek women who had been students at the LSE at the time of the coup spoke passionately about the continuing struggle to liberate Greece from oppression. Gella Varnava-Skoura read quotations from a list of Greek democratic activists saying how the occupation of 28 April had been appreciated. Maria Styllou explained how, animated by the spirit of 1968 Greeks had fought the Colonels with strikes, occupations and protests. The Junta had collapsed in 1974 as with the fascist regimes in Portugal and Spain in 1975. One of the leaders of the Greek left, Manilos Glezos still active in the 90s, had said the action in London had been inspiring for the Greek resistance. Maria also noted that 28th April marked the second anniversary of the start of the Golden Dawn trial.

Steve Jefferys another of the LSE student occupiers closed the event alerting the audience to the new dangers of fascism in Europe today, particularly with Marie Le Pen in France. ’50 million votes have been cast for extreme right wing parties in Europe in recent months. But Le Pen is a real threat’. She could get up to 15 million votes in the second round of presidential voting with the Front Nationale gaining 100 seats in the National Assembly,’ he warned. This was the new face of fascism ‘which does not always arrive in tanks’. ‘Never Again’, he declared, in calling on the audience to stop the extreme right today.