How to combat fascism

As well as the ever-worsening Climate Crisis, and the war in Ukraine, many people – and not just those on the left – are increasingly concerned about the international spread of, and links between, the authoritarian populist right, the far right, and outright fascists. Ian Parker, amongst others, has pointed out how the far right have mobilised online to exploit anti-lockdown and anti-vaxx campaigns – directed against Covid health measures – in order to spread their wider conspiracy theories.

In particular, the far right have successfully used social media during the isolation imposed by lockdowns – and the hardships and discontents that have arisen during them – as ideal breeding grounds in which to grow and spread their ideas and conspiracy ‘theories’ against facts, climate science, ‘cultural Marxism’, feminism, ethnic minorities, refugees, and LGBTQI+ people. It is in this genuinely worrying context that Paul Mason’s latest book, How to Stop Fascism, has appeared. 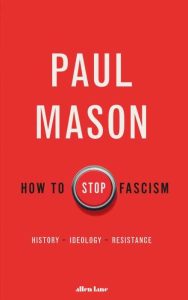 Is this the way to combat fascism?

There is absolutely no doubting his genuine and deep-felt anti-fascism, and the early chapters in his book contain a useful explanation of how the various crises of neoliberalism have undermined security for so many individuals and communities. These chapters also have an excellent up-to-date survey of how far-right and fascist groups are using social media and online platforms – including Telegram, Signal, and various ‘*chans’ – to exploit these systemic crises in order to reach a much wider audience. As a result, several of their key ideas and themes have been picked up, and spread, by right-wing populists and authoritarian ‘conservatives’: “For now, fascism’s strength is best judged through the salience of its ideas, which have spread rapidly via social media.” (p.xv). Certainly, it soon became clear that the hard-right Tory faction around Johnson were abandoning earlier ‘moral and intellectual dividing lines’ between them and the far right.

However, in order to stop this spread of fascist ideology – and fascism itself – Paul Mason essentially continues an argument he put forward in 2019, in relation to stopping a ‘No-Deal’ Brexit. This was for Labour to support a ‘progressive’ Popular Front, including not just Greens, but also the LibDems and even ‘moderate’ Tories, to stop such an eventuality. In 2022, he now argues that anti-fascists need to: “answer the same questions that confronted progressives in the 1930s. How do we unite the left and the political centre to fight the threat?…How do we defend the rule of law…protect democracy from fascism?” (p.xviii)

To defeat today’s fascism, Paul Mason advocates the formation of a ‘progressive’ Popular Front, based around a defence of democracy and an agreed package of social reforms. In the book’s later chapters, he argues that the various Popular Fronts of the 1930s are evidence that such a tactic worked – and makes a particular reference to the Popular Front in France. The basis for advocating this strategy seems to be that the UK’s ‘political centre’ has now moved away from neoliberalism as a result of the climate crisis and the pandemic, with the bringing in of furlough schemes and various public health measures as one ‘proof’ of this shift.

In fact, he even references right-wing Tory Michael Gove as quoting Gramsci (on ‘morbid symptoms’) to justify Johnson’s “break with globalism” during the pandemic. Yet this ‘evidence’ seems extremely thin. Nonetheless, as Gove has referenced Gramsci’s famous quotation about ‘morbid symptoms’, it will be useful to quote it in full: “The crisis consists precisely in the fact that the old is dying and the new cannot be born; in this interregnum a great variety of morbid symptoms appear.” [Prison Notebooks, 1930, p.276]

The ‘crisis’ Gramsci referred to was a “crisis of authority”, in which “the great masses have become detached from their traditional ideologies” because of the deepening economic and political crises, and because no clear alternative seemed viable. It is in such transitional phases – when the old order is dying, but a radically new one is not yet able to be born – that fascism seeks to capture mass discontent, and attempts to deflect it away from opposition to capitalism. An up-to-date treatment of this aspect can be found in the Spring 2022 issue of the anti-fascist magazine, Searchlight which has a review of Paul Jackson’s new book, Pride in Prejudice. 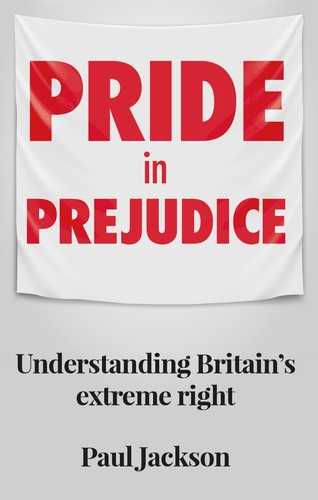 How fascism uses discontents to grow

Although many assume that the term ‘morbid symptoms’ relates to fascism itself, it actually relates to Gramsci’s criticisms of the ultra-left ‘Third Period’ adopted by the Stalinised Communist movement from 1928 onwards. Gramsci was against this policy for not offering “a democratic perspective in the fight against Mussolini’s rule.” For those interested in exploring this in more detail, Gilbert Achcar gives an excellent overview of what Gramsci really meant by ‘morbid symptoms’ in International Socialist Review, No. 8.

Stalin’s ‘Third Period’ identified ‘social fascism’ – ie. the various socialist/social democratic parties – NOT fascism itself, as the most immediate enemies of the working class movement. Consequently, even in Germany before the Nazi takeover, communists and socialists sometimes fought each other, and even occasionally co-operated with the Nazis against their working-class rivals. The leaderships of both the communist and socialist parties ignored Trotsky’s repeated calls for a United Front of working class parties – even when their rank and file members also called for such unity. Paul Mason is absolutely right to argue that fascism triumphed in Germany not just because of its own strengths, but also because of the left’s failure to adopt the best resistance to it.

However, following the Nazi takeover in Germany in 1933, Stalin was so desperate for allies against the growing threat of Nazi Germany, that from 1935 he turned not just to socialists, but also to mainstream capitalist ‘liberals’ in Popular Fronts. It is this kind of ‘progressive’ Popular Front that Paul Mason now advocates. For instance, he refers to the Popular Front in France, which was centred on a social package agreed by Radicals, Socialists and Communists, which confronted the French fascists, and won the 1936 general election.

Yet, if the story is taken further than the Popular Front’s early phase, this ‘success’ was more limited than Paul Mason seems to suggest. In particular, when France’s economic crisis deepened, the ‘liberal’ Radicals turned on the left, eventually paving the way for Vichy France and active collaboration with the Nazi invaders. Similarly, the Popular Front in Spain was initially successful; but, as the Civil War developed, Spain’s liberals – and communists – acted to restrain grassroots radicalism, eventually contributing to Franco’s victory in 1939. Thus, for these practical reasons, a corrective to the strategies advocated by Paul Mason is needed. One excellent corrective is provided by Creeping Fascism, written by the late (and much missed) Neil Faulkner, along with other contributors. 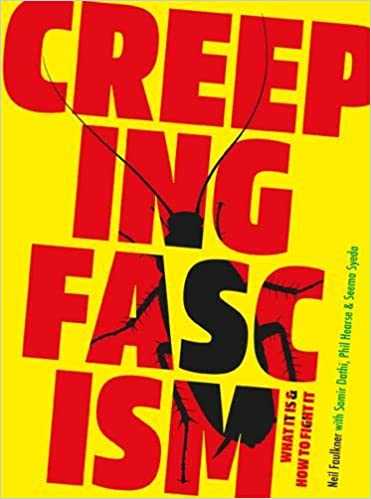 Today’s fascism – and how to stop it

Other ideas for dealing with today’s fascists can be found via this link, to a recent conference in Berlin, organised by the European Left.

One aspect of confronting – and defeating – fascism that is largely missing from Paul Mason’s book, is the tactic of blocking fascist attempts to march and demonstrate. While he is absolutely right to argue that today’s fascists spend a lot of time online, he has little to say about fascist street activities, even though he recognises that modern-day fascist groups also place a lot of emphasis on ‘symbolic acts’. Precisely because today’s fascists are skilled in their use of social media, they put a lot of effort into sharing photographs and videos of ‘successful’ street actions.

Which is why the old tactic of ‘No Pasarán!’ is still so important. Back in November 2018, the ‘North West Frontline Patriots’ only managed to ‘march’ down the steps of Liverpool’s Moorfields Station – before running all the way back up the steps, to the accompaniment of a Benny Hill theme tune! No surprises for guessing that these fascists didn’t end up sharing this video as an example of their ‘strength’. 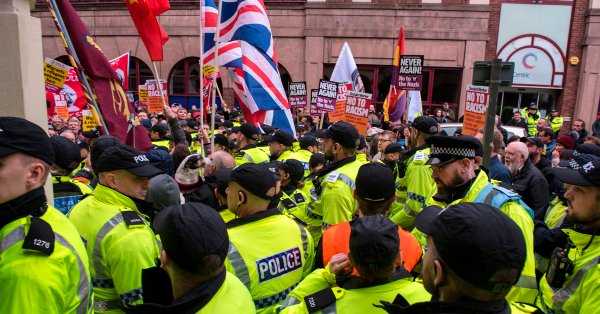 The fascist ‘march’ through Liverpool that wasn’t!

Another successful example of blocking fascist marches, and thus depriving them of the chance to show their ‘success’ online – as well as knocking their self-confidence – took place in London on 3 August 2019, when various anti-fascist and anti-racist organisations blocked a group of fascists, who proved unable to leave their gathering point at Portland Place. 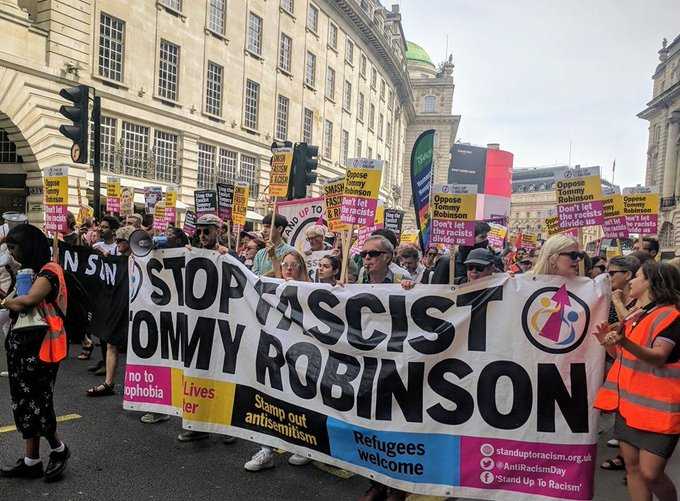 Stopping the march in London

A possible explanation of Paul Mason’s failure to make such tactics a significant part of his proposed ‘progressive’ Popular Front strategy may be that the ‘liberal’ centre tends to decry such ‘undemocratic’ direct action. Yet, if unchallenged, fascist groups often try to march through areas where they can intimidate ethnic minorities; while such ‘successes’ help them ‘grow’ their movements online – and on the streets.

It may be that, during the isolation of lockdowns, I missed the LibDems – and even Tory ‘centrists’ – formally renouncing their adherence to neoliberalism, and their re-conversion to the social welfare of liberal capitalism post-1945. If I did, I would be grateful if Paul – or someone else – would me send a link. In the absence of that information, it’s probably wise to remember that it was the ‘progressive’ LibDems and the Tories (and ‘New’ Labour!) who imposed the years of austerity and hardship which actually paved the way for the growth of this current wave of right-wing extremism, racism and creeping fascism.

To end, I have a comradely suggestion for Paul: why not call this Popular Front a ‘Democratic Alliance’, rather than giving it a ‘progressive’ label which, with unrepentant neoliberals in it, would be an oxymoron? We have much common ground, in that we all agree that democracy IS under threat from creeping fascism – and from the authoritarian Tory right-wing. Thus we can work together to defend democracy. Sadly, however, I can’t see LibDems – let alone ‘soft’ Tories – agreeing to the economic and social transformations that are so desperately needed to replace crisis-ridden capitalism with a socially just and ecologically sustainable ecosocialism.

Allan Todd is a member of Left Unity, an ecosocialist/environmental and anti-fascist activist, and author of Revolutions 1789-1917 and the forthcoming (July 2022) Trotsky: The Passionate Revolutionary

19 April 2022
To submit an article for the 'Discussion & Debate' section of our website please email it to info@leftunity.org