Manchester United Against the Tories 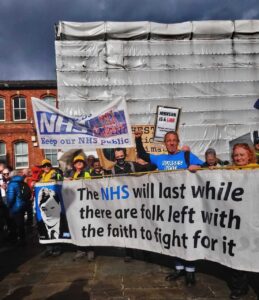 Nick Jones reports: Several thousand anti-Tory protesters marched in Manchester today in what has been the largest demonstration to occur here since covid regulations are being lifted.

The People’s Assembly organised the demonstration to fight for affordable housing, jobs, fully funded social care, schools and NHS. There were a number of unions present – GMB, NEU, RMT, UNITE marching alongside migrant and refugee campaigns. Over 1000 of the Left Unity joint Eco socialist campaign leaflet were given out. 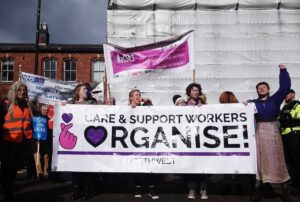 NHS protestors demanded an end to cuts and privatisation. They want to scrap the Tory Health and Social Care Bill- dismantling the NHS and paving the way for even more privatisation.

The National Care, Support and Independent Living Service campaign were marching and demanding:

* Publicly funded, free at the point of use

* Publicly provided, not for profit

* Designed to meet the needs of informal carers

We need an anti austerity movement, we cant wait for Labour under Starmer to deliver this.

It’s unlikely he will.

We need to unite those who oppose Tory cuts, privatisation and austerity.