Liverpool rallies to the RMT: Enough is Enough 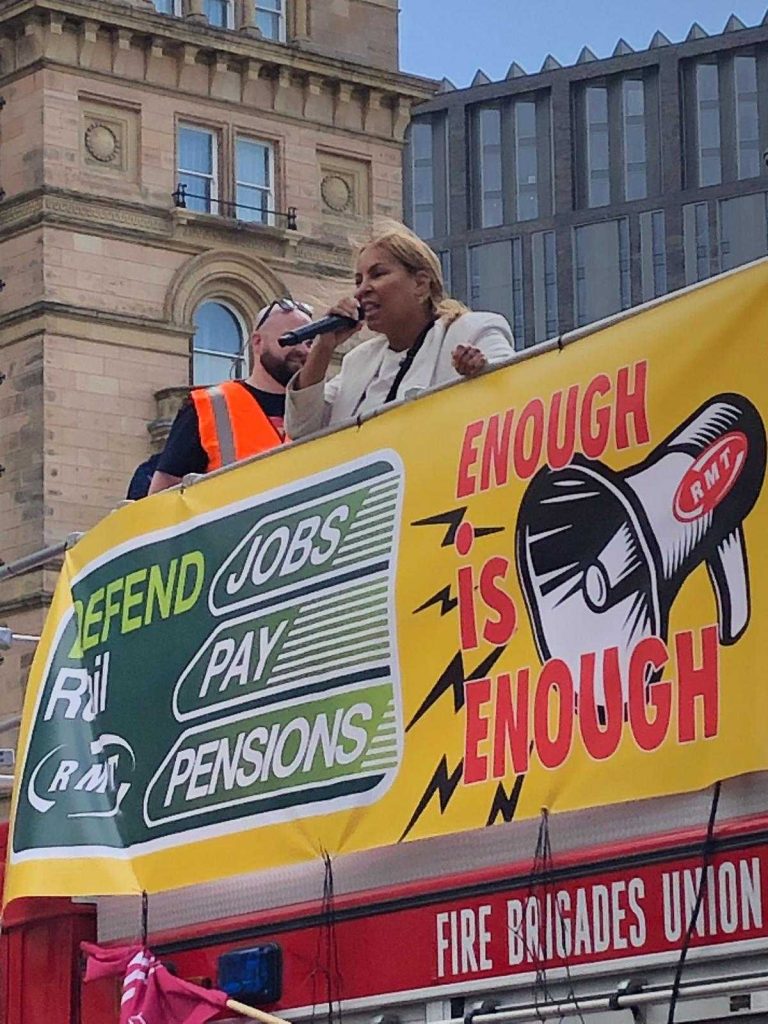 The march had a good reception from shoppers and arrived at St Georges Plateau in good spirits. The FBU had sent their campaign wagon, an old fire engine used in many a great demonstration. There were speeches from many unions as well as the RMT. These included the CWU, UCU, PCS, and FBU. The local LGBTQ+ socialist group were also invited to speak, as they had supported every RMT picket in the years since their formation. 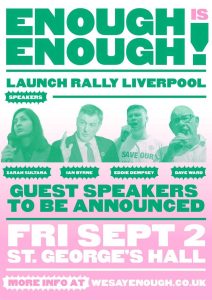 The rally came after a major success for striking Arriva bus drivers, who won an 11% pay increase after an all-out strike. For the first time in many years dock workers have voted to take industrial action. Sharon Graham’s role as General Secretary of Unite the Union is showing real results in both the buses and the docks.

The rally also came after the Liverpool FC supporters, led by Ian Byrne MP (now himself threatened with deselection) forced an apology from the Paris authorities for its disgraceful attack on football supporters.

This was a fine sunny day and people were in good spirits. A meeting planned for Friday 2nd September in St Georges Hall had sold out in minutes the day before, reflecting a mood for struggle.

There were banners from many unions and socialist groups but I saw no Labour banners though there were some left Labour members present.

Trade unionists rally to the RMT

The situation in Liverpool is not all rosy. Liverpool has serious problems. More babies die under the age of one year old than in any other area. There is serious work done around food pantries and the Right to Food, but hunger is still a real issue. There are fears that gains won recently, like those for rough sleepers, could be damaged by the Commissioners.

The cost-of-living crisis and especially the cost of fuel is posing a major problem here in Liverpool and Merseyside, as it is nationally. The DWP is proposing the closure of its office in Toxteth, one of the poorest areas.

The ICS, the new Intolerable Conservative System for health care, is proposing major “Cost Improvement programmes” or cuts, and threatens the very future of Liverpool Women’s Hospital. This at a time of a national maternity crisis and longer waiting lists for gynaecology than any other field of surgery. This at a time when poor women are known to have 16 years less life in good health than the wealthy. The NHS campaigners had an excellent response from the crowd.

Sheila Coleman from the Hillsborough Campaign spoke of how the Hillsborough campaign had to fight separate from any political party, relying on organising the people most involved. Sheila denounced the handover of the city to Commissioners, of how we can only rely on our own communities to fight in defence of our people. There is no lead coming from town halls. Sheila launched a demand for a ‘Power to the People’ campaign linked to a similar one in Glasgow, where ordinary people would defend our right to fuel, street by street, in a major grass roots campaign, on similar lines to the Acorn defence of tenants.

Sheila also condemned the situation with Commissioners. The city has been taken over by Conservative Government commissioners. It was bad enough when only a few services were taken over, but the government has now decided to take over governance and finance too. So, a city that does not elect a single Conservative councillor is now run by the Conservative government’s appointees, with no democratic oversight. Liverpool City Council under Starmer’s Labour has been taken over not with a bang but a whimper.

In the 1980s when I and the other 48 Labour Councillors were trying to defend the people of Liverpool from Thatcherism, we were constantly threatened by the Labour Party run by Kinnock, that if we persisted in building houses and creating jobs, the city would be taken over by commissioners. Now right-wing Labour have themselves brought commissioners into the city, and not one council house has been built, not one sports centre opened, no nursery class nor city park opened. Nothing has been won, yet the commissioners have come in without resistance. More than that, they have done nothing to organise protests or to leaflet the city. The huge vote of more than 70% for Labour in Corbyn’s time has been dissipated.

The Labour Right under Starmer intervened to install Joanne Anderson as the Labour Candidate for Mayor, over Anna Rothery, despite her inexperience in any senior role in the council, and has now connived with bringing the commissioners in to overturn the previous mayor, and left our people de facto without political representation. The rebel councillors on the council, the Community independents, could become a focus of resistance. Whether or not they rise to the challenge the resistance will need to go in honesty and in depth to all the wards, all the communities, all the trade union branches and workplaces, to make a case for organised resistance

Eddie Dempsey, RMT Deputy General Secretary spoke honestly and movingly about the scale of the challenge we face. He spoke about how we are fighting for those we love, our families, our friends and our work mates. Eddie spoke of the threat to our NHS, about his father being ill in hospital and of how we need the NHS, about our right to retire in dignity and comfort, about children’s need for food and education. Eddie spoke of how we need to be able say we answered the challenge, we did our best, we committed to this fight.

2 responses to “Liverpool rallies to the RMT: Enough is Enough”