Justice for Simba – Patients not Passports 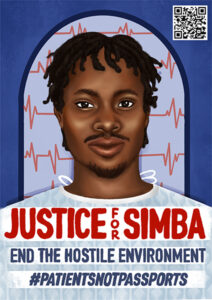 Nick Jones reports: A lively but very important protest took place in Sheffield yesterday against migrant charges for NHS treatment. United in the demands of ‘Justice for Simba’ around 250 marched around the streets of Sheffield handing leaflets to the public to raise awareness of the Government’s hostile environment and the reality for victims.

Keep our NHS Public has campaigned alongside others to expose the Tory’s changes to the NHS.

Since the law changed in 2015 many people are no longer deemed ‘ordinarily resident’ in the UK and are charged for all NHS care at 150% of cost price except for emergency care. This is considered a form of privatisation as it prevents NHS treatment from being free at the point of use for all UK residents; a basic tenet of the NHS since its inception. This has put many lives at risk. Since 2017 this policy has been further ramped up by the Government with more and more pressure being put on Trusts to collect money from those deemed as ‘non-resident’. Unpaid debts can lead to visas, or right to residency, being removed.

Pregnant women are thought to be particularly targeted and a Freedom of Information request from Keep Our NHS Public’s Save Lewisham Hospital Campaign showed over 500 women in Lewisham and Greenwich NHS Trust in 2018 alone, were asked to pay up to £9,000 for having a baby. A new report from Maternity Action backed by the Royal College of Midwives (RCM) in September 2019 showed these charges risked making women unable to access appropriate perinatal care.

Simba has lived in the UK since he was 14 years old, when he and his family came to the UK from Zimbabwe. A few weeks before his 30th birthday, Simba Mujakachi suffered an unbearable headache and collapsed at home. He was rushed to his local hospital and needed life-saving brain surgery to relieve the pressure from bleeding in his brain. Simba survived, but the stroke left him in a coma for two weeks, and paralysed on his left side. He woke up to a bill for £93,000. Two years on, Simba is fighting for his recovery but Sheffield Teaching Hospitals NHS Trust is still chasing him for payment.

As a failed asylum seeker he was not allowed to work and could not pay for his treatment.

We need to campaign against the charges that deter people seeking treatment.

We support a publicly funded NHS that is free at the point of need.

Find out more about Simba’s case:

Migrants Organise – Justice for Simba: Join the Carnival of Resistance to the Hostile Environment in the NHS

Patients Not Passports – A toolkit designed to support you in advocating for people facing charges for NHS care, and in taking action to end immigration checks and upfront charging in the NHS.

19 September 2021
To submit an article for the 'Discussion & Debate' section of our website please email it to info@leftunity.org