Seema Syeda writes: Last month I attended the 2021 European Forum in Brussels on behalf of Another Europe Is Possible as part of Left Unity’s delegation, having attended the last forum in 2019 in a personal capacity. This year’s forum had a much more intimate feel than the last one. Politicians were more approachable and accessible and there was more room for debate and intervention from the floor. 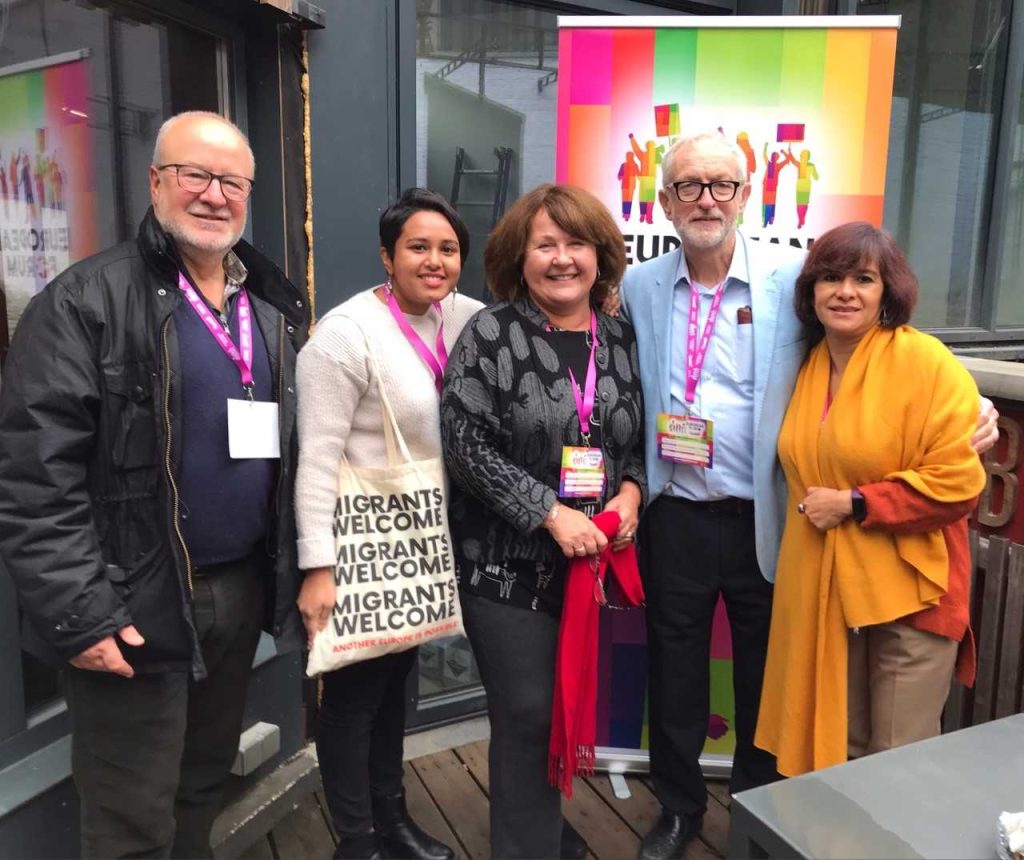 In an interesting development, Jeremy Corbyn attended the Forum, not just as a keynote speaker but also as a participant, remaining in the audience for many of the sessions. He was keen to build links across the European left, working particularly on migrants and refugee rights and fighting the rising far-right across Europe. Whatever Labour’s position on EU membership during his years as Labour leader, it was clear that he remains committed to internationalism and practical solidarity on a Europe-wide level and beyond. I’m hopeful that this is a harbinger of more pan-European activity, with the UK left joining in meaningful cross-border campaigns.

Natalie Bennett, in her capacity as a Green Peer in the House of Lords, also joined the Saturday plenary, delivering a pertinent summary of the post-Brexit situation and the dangers posed by the current Tory government.

Despite Brexit, European delegates were keen to know what the next moves for the UK left would be. Many took hope from the mass movement that emerged in 2015 around the Labour Party, and whilst the mood in the UK was largely one of defeat after the 2019 election results, European delegates I spoke to were still inspired by the fact that the left were so close to forming a government. They are waiting keenly to see what happens next. While the left no longer holds the leadership of the Labour Party, the mass movement is still out there, and we now need to organise and mobilise that movement through extra-parliamentary means to challenge the far-right agenda in the UK, joining activists, socialist politicians, and trade unionists in a broad and deep organisation.

The Youth Forum was inspiring. It was encouraging to hear committed calls for more workers’ control of industry, stringent anticapitalism, and a need to transcend national borders with pan-European organising. There seemed to be a plan to reconvene the delegates soon to work on a single cross-border campaign. It’s important that a lasting network that meets regularly and has the independence and fluidity to take democratically decided action is created.

There was some good news from the plenary on economic and social issues after the pandemic, as the left in the European Parliament successfully moved a resolution for a TRIPS waiver – dropping patents on vaccines and making them accessible in the global south. The next hurdle is getting the European Commission to support the TRIPS waiver.

However, in general, there was agreement that the pandemic had compounded social crisis and that there was no certainty as to when or if it would ever be over. I asked about the question of race and migration, highlighting that in Britain, 50% of doctors who have died on the frontline have been from a racialised community, with racialised communities continuing to suffer the largest death rates as they form the bulk of essential workers. It was clear that more work needed to be done organising people of colour and migrant workers within the left and the labour movement. The panellists all agreed that the European left was lacking on this front. Zofia Malisz from Razem, Poland, reported on the Poland-Belarus border crisis and the difficulties organising in a region where migrants and those who helped them are criminalised. She pointed out, however, that grassroots organisations such as Grupa Granica are active on the border delivering material help and solidarity to migrants, but that organising migrants themselves was an urgent priority.

On climate action, there was general dissatisfaction with COP26. The Belgian Climate Minister Zakia Khattabi said this was not surprising and that national governments should go beyond the deal that was struck and commit to sustainable transition in their national policy. David Rinaldi, a civil society organiser, emphasised the importance of bottom-up organisation and building social movements from below, following the example of the Sunrise Movement in the USA.

All in all, the forum was a much-needed platform for regroupment of the Left on an international level, for the forming of networks and relationships, and most importantly, as a springboard for continued action. I’m hopeful that this will now take place, as with the challenges of the climate crisis, the covid-19 pandemic, and the abject failures of capitalism, the need to organise internationally is an existential one.

16 December 2021
To submit an article for the 'Discussion & Debate' section of our website please email it to info@leftunity.org