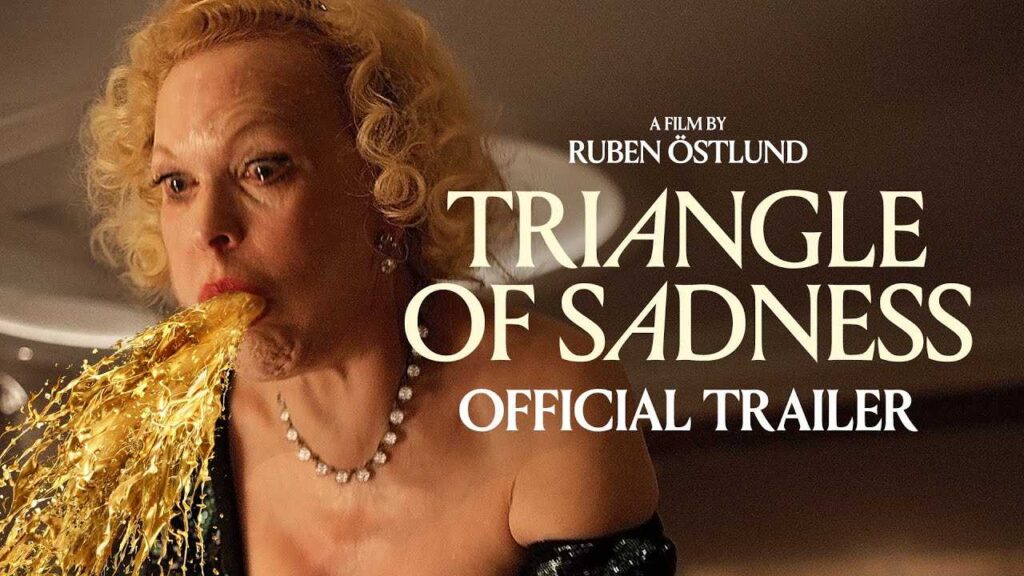 If you like films that make you think, or that contain cutting political satire, or that simply have hilarious scenes of slapstick comedy, then the good news is that you can indulge all of your cinematic preferences by watching just one film!

The film in question is Ruben Östlund’s latest film, Triangle of Sadness – which won the director his second Palme d’Or at the Cannes Film Festival (the other winner was his The Square – which will be shown on Film4 at 12.55am on Friday 16 December). One ‘warning’ though: the film has three ‘acts’, and its running time is 2hrs. 30mins. However, I can honestly say that it doesn’t feel like that at all.

The film follows two fashion models – one of whom is also an ‘influencer – who are given a freebie trip on a luxury yacht. This yacht is full of neoliberal capitalist billionaires, and the staff who are instructed never to say ‘No’ to any of their demands. It is also – theoretically, anyway! – captained by Woody Harrelson, described by some reviewers as a “disillusioned Marxist”, but who seemed to me to be simply a drunken Marxist (warning: class-war invective coming up!) trying to blank out the insufferable boring inanity of the global filthy-rich passengers!

All goes (relatively) smoothly until a huge storm – and an encounter with modern-day pirates – turns the privileged world of the 1% upside down. For those with sensitive stomachs, some of the early consequences of the storm may well make you feel a bit queasy! Those like me, raised on – among other filmic staples – the toilet humour of the ‘Carry On’ films, will be fine!

A ‘taster’ – so to speak! – of what happens during the storm!

It is fair to say that reception of the film has been ‘mixed’ – ranging from 5-star reviews down to 2-star ones. Wendy Ide (3 stars) in The Observer (29 Oct. 2022) described the characters as “grotesque caricatures” and felt the film had “more style than substance.” While Peter Bradshaw in The Guardian (25 Oct. 2022) was very scathing, calling it a “heavy-handed satire on the super-rich” which “loses its shape” – and consequently only giving it only 2 stars.

In fact, Östlund himself accepts that Triangle of Sadness is a “divider.” His earlier films – Force Majeure and The Square – respectively savaged male egos and mocked the pretentious art world. In this film, he targets the ultra wealthy of the 1% – who, let’s face it, fully deserve to be eviscerated (metaphorically speaking, of course!).

For me, as well as liking films that make me concentrate on what the director is trying to say, I also like films that, as I watch them, also make me see parallels with what I’ve experienced or what is going on in the wider world. The reason I liked this film so much is because it led me to do all those things.

The constant demands made on the staff by the wealthy passengers reminded me, slightly, of my childhood in the late 1950s, when my father worked as a grocery delivery driver for the village shop. At that time in rural South Norfolk, there were no supermarkets and most people did not have cars. So my father spent the week delivering a wide range of goods round the various villages. That working week was from Monday through to Saturday lunchtime: meaning that Sunday was the only full day we had for the whole family to be together. Yet the house we lived in was a ‘tied’ cottage, belonging to the shop owner. Very often, Sunday mornings – as we were getting ready to go for a family bike-ride or a walk and picnic – one of the shop owners’ children would appear, bearing a message requesting his assistance, as their car wouldn’t start. Sometimes those mechanical repairs would take him all morning: his ‘payment’ was a packet of 10 Woodbine cigarettes! But, just like the staff on that luxury yacht, my father’s job – and our home – depended on catering to the demands of his employer.

More generally, the aftermath of the storm (which led to a sudden reversal in class roles and relationships) made me think of the pandemic – when it seemed that, all of a sudden, huge swathes of society suddenly woke up to the fact that there were such things as ‘essential’ workers. Not just nurses and doctors, but also farm workers, delivery drivers, supermarket workers, postal workers, refuse collectors – and many more. With the working class being so much larger than it used to be, watching Triangle of Sadness should be made compulsory for all of them! Because they would then realise that they are all essential workers – and that it is more than possible to imagine, and achieve, a world in which ‘essential’ workers are those who wield power, not the privileged 1%!

Some who have seen the film have said that arms-manufacturing billionaires and Russian oligarchs are just too easy to have as targets for satire. There was a screening in Paris for a select audience, which included “one of the richest persons in France.” At the end of the film, that person stood up and screamed that the film was “too simple.” Well – they would say that, wouldn’t they?! Östlund’s response was to agree that the film wasn’t “very complicated” – and then went on to say, with arms defiantly folded, that: “It’s not OK to exploit another human being and pay them a shit salary. And it’s not OK to make a huge profit, using other people. It is that simple!”

The one criticism I’d make of the film – a point made by Wendy Ide – is that its third act is its weakest part: she called it “flabby.” It basically suggests that, even though the ‘essential’ workers have been able to reverse the power relations that place them at the bottom of society, the old ‘principle’ that ‘power corrupts’ will still apply. If I’d been a consultant on the film, I’d have advised Östlund to give the film a very clear revolutionary ending!

Nonetheless, my strong advice is to watch it – and then use it to fire your enthusiasm to overthrow a system that puts such obnoxious people as the yacht’s passengers in charge of the world’s ‘essential’ workers! To whet your appetite, here are a couple of links to trailers that give some idea of what to expect.

Allan Todd is a climate and anti-fascist activist; a member of Anti*Capitalist Resistance and Left Unity’s National Council; and author of Revolutions 1789-1917 (CUP), Ecosocialism Not Extinction (Resistance Books), Trotsky: The Passionate Revolutionary (Pen & Sword), and the forthcoming Che Guevara: The Romantic Revolutionary

14 December 2022
To submit an article for the 'Discussion & Debate' section of our website please email it to info@leftunity.org