Allan Todd writes: Across Europe, there are governments and parties increasingly adopting illiberal forms of governments and/or political agendas that borrow heavily from the authoritarian hard-right or even from fascism.

One of the worst examples is Orbán’s Hungary, where his party Fidesz currently rules the roost – though Poland under the hard-right ‘Law & Justice’ party (PiS) isn’t far behind. Since Trump’s defeat, Orbán has become the darling of the hard/far right, with continuing links to alt-right ‘warriors’ such as Bannon. 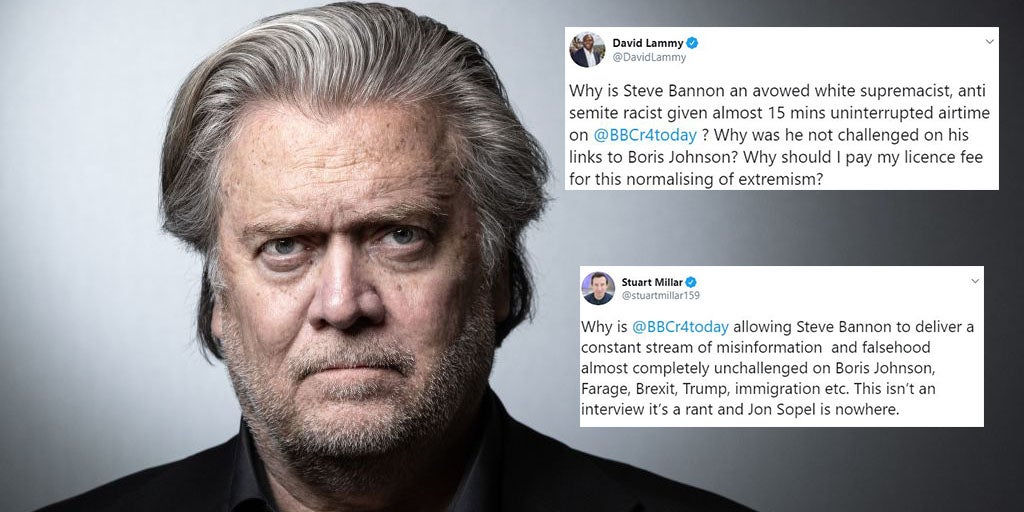 Bannon – advocate of a Nationalist International

Gaining support by pushing an intolerant and reactionary agenda which, amongst other things, is deeply anti-migrant, Orbán has implemented constitutional changes that have undermined Hungary’s democratic institutions, curtailed free speech and shackled the independent press. As well as his attacks on migrants, Orbán also intervenes in a culture war in which attacks on liberal academic centres are used to roll back progressive agendas, and to ‘normalise’ racist and extreme right-wing ideas.

As a result of all this, the Freedom House think-tank downgraded Hungary in 2019, from a ‘free’ to only a ‘partly free’ state.

However, such illiberal culture wars are not restricted to the countries of central and eastern Europe. As pointed out in the Autumn 2021 edition (483) of the anti-fascist journal, Searchlight.

This right-wing offensive can also be seen, for instance, in Italy. There, hard-right parties are currently engaged in a culture war to reclaim and re-popularise the ‘Mussolini brand.’ As well as waging this culture war via social platforms and the internet, the Lega and the Brothers of Italy are increasingly attempting to ‘reclaim’ public spaces – such as campaigning to re-name squares, parks and streets after individuals associated with Italy’s fascist past. Some regional authorities have even helped finance ‘cultural events’ organised by far-right and even neo-fascist groups.

Both the Lega, and the Brothers of Italy, clearly see such public symbolism as a way to engage with a wider audience and so promote their political agenda. In the run-up to this month’s local elections in all Italy’s major provincial capitals, Italy’s media have given considerable coverage of the rivalry between these two hard-right parties – with even Mussolini’s name itself being used by these two parties in their election campaigns. Not surprisingly, this ‘promotion’ of fascist symbolism has given a boost to neo-fascist parties – such as CasaPound and Forza Nuova. Such developments have resulted in one national newspaper, Il Fatto Quotidiano, taking unprecedented action: launching a petition to the government, warning that such examples indicate “an alarming trend, which taken as a whole, form part of a chain of events that pose questions about the fundamental principles of our democratic system.”

However, UK citizens should not image that Britain is free of such dangers. An earlier post on Left Unity’s website (July 2020) warned about the slippery slope we’re currently on.

Since then, we’ve continued to slide downwards towards the hard-right illiberal authoritarianism of Orbán’s Hungary; with Johnson happy to ignore criticism for meeting with Orbán earlier this year. 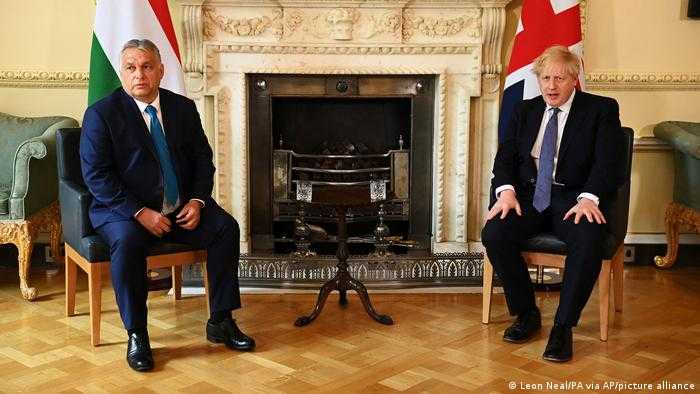 One of those criticising Johnson for having such a cosy ‘fireside chat’ with Orbán was Labour’s Jeremy Corbyn, whose Tweet made abundantly clear why all democrats should give Orbán a wide berth. 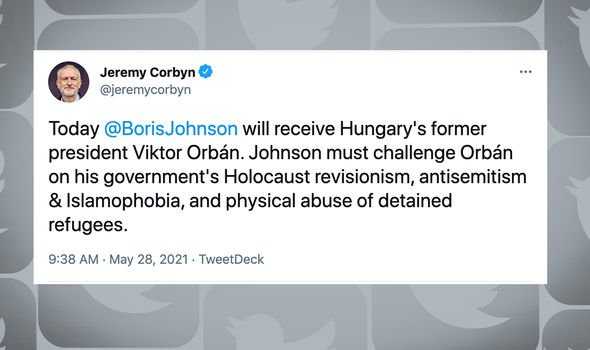 There have been plenty of ‘Reasons to be worried’ about the state of UK democracy in the past few years. As well as the massive Tory election fraud in GE2015, via overspending in 33 key marginal seats, there have also been growing concerns about the role of Russian money and interference in UK politics – not just during the EU referendum of 2016, but also subsequently. Significantly, Johnson delayed the publication of a select committee report into this until after GE2019!

Since then, there has been increasing evidence of a much more hardline policing response to peaceful civil resistance. The first real evidence of this – almost immediately after Johnson had secured a comfortable majority in GE2019 – was in February 2020, with an unprecedentedly aggressive police response to a Greenpeace action against BP’s London HQ, designed to draw attention to that company’s continued massive investments in fossil fuel projects.

Although no physical violence was directly inflicted on the protesters, the police reacted with aggressive shouting, and reckless grabbing and throwing around of Greenpeace equipment.

More recently, on the 9th day of Extinction Rebellion’s ‘Impossible Rebellion’ at the end of this August, there was a violent response from Metropolitan Police officers against XR activists who were blocking London Bridge with an open-top bus. Police hurled protesters aside, resorted to headlocks, threw punches and used batons against what were entirely peaceful protesters; one window of the bus was broken by police in the melee. 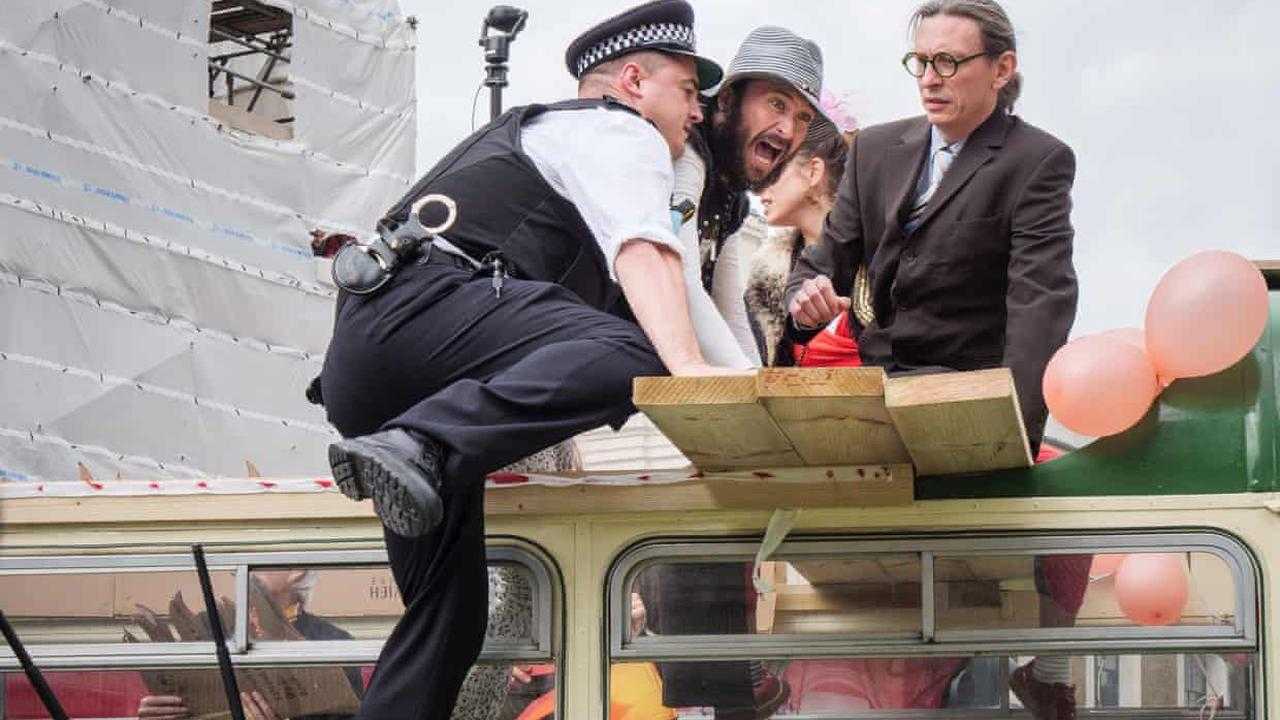 Part of the violent police response to XR protesters, August 2021

A retired Met detective sergeant – now an XR police liaison – described this action as “an appalling example of policing,” and stated that “Clearly they’ve got orders to use force on protesters that are trying to protest peacefully in the street.”

Police then imposed a Section 14 Order, requiring protests in that area to end immediately. Their use of this tactic against XR’s ‘Autumn Rebellion’ in October 2019 was later ruled unlawful by the High Court.

Johnson’s recent reshuffle, in mid-September, showed the increased grip of the Tory hard-right – and Johnson’s determination to press on with a culture war against a liberal and tolerant democracy. Although there were some sops to middle-Englander Tories, Johnson’s main aim was to promote several culture warriors – along with more right-wingers and Brexiteers.

Nadine Dorries, the new Culture Secretary – who has criticised the BBC and ‘leftwing snowflakes’ – will now be in charge of the licence fee, the appointment of the chair for Ofcom, and the new Online Harms Bill. Kemi Badenoch, also a known culture warrior, became a senior minister of state for housing: Badenoch is known as an ‘anti-woke’, has described BLM as ‘anti-capitalist,’ and accused schools of ‘uncritically teaching political race theory.’ Significantly, too, Rees-Mogg, Raab, and Priti Patel stay at the top, while Liz Truss – a ‘free-marketeer’ – has become Foreign Secretary.

As well as Dorries, other hardline Brexiteers include Anne-Marie Trevelyan (Trade Secretary), Nadhim Zahawi (Education Secretary), and Simon Clarke (Chief Secretary to the Treasury). Even the more centrist Anna Soubry has described the reshuffle as “appalling,” concluding that “There has been a huge shift to the right.”! Another Tory MP described the reshuffle as “pandering to the culture warriors who want to talk about wokery all the time.”

This ‘culture war’ action inside No. 10 is led by married couple Dougie Smith and Munira Mirza (some Tory staffers have said these two “really believe” culture war stuff) – they are aided in this by former BBC editor, Robbie Gibb.

Particularly worrying in all this is that Priti Patel – despite all the controversy over bullying claims, and her more recent appalling reactions to football players ‘taking of the knee’ – remains in the key post of Home Secretary: 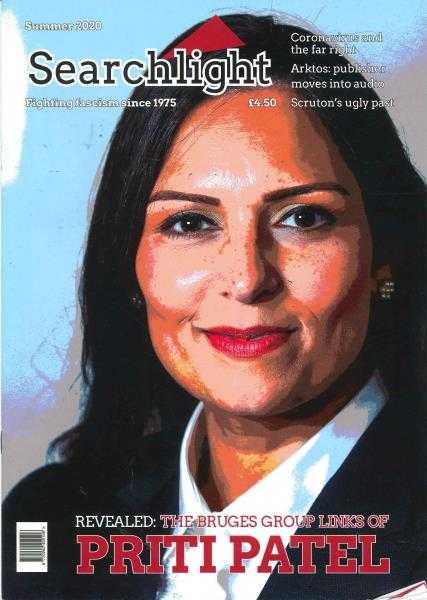 Priti Patel’s links to the right-wing Bruges Group, as exposed in a recent issue of ‘Searchlight’

Most recently, of course, her proposals for dealing with refugees shows the growing influence of the Tory hard-right – and from forces to the right of them, such as Nigel Farage. 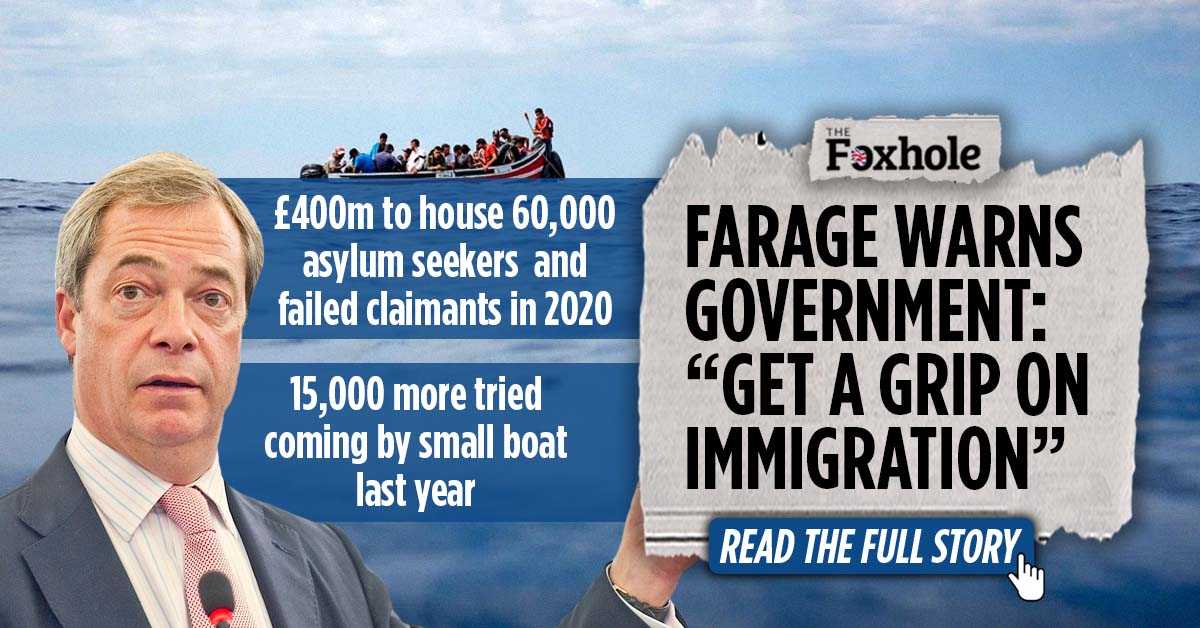 Farage: continuing to use race as a way of building the far right

Patel stays in post, even though her proposals breach international law – especially the 1952 UN Geneva Convention on Refugees – by trying to criminalise those who arrive in the UK ‘irregularly.’ Her plans for overhauling the ways people can apply for visas for asylum would remove their right to protection. While her threat to turn refugee boats back, and her proposals for off-shore processing and internment (clearly following Australia’s ‘lead’), are clearly designed to appeal to, and increase the base for, the hard right. 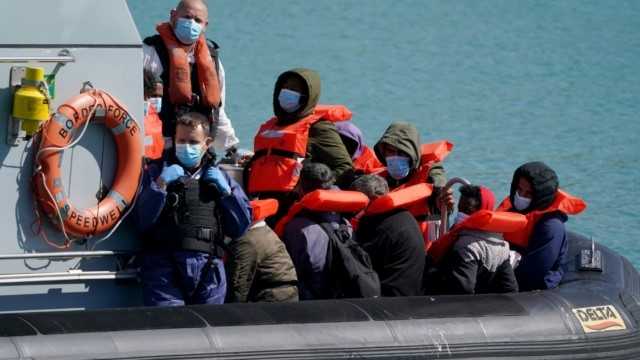 ‘Seven reasons to be worried’

If none of this gives you any ‘reasons to be worried’ (to misquote Ian Dury!) about the state of UK democracy, then maybe it’s time to start reading the Guardian! At the beginning of this month, that paper carried an article about Johnson’s ‘power-grab’ – which specifically made parallels with recent illiberal developments in Hungary and Poland.

In all, the journalist lists seven areas of particular concern:

It is worth quoting the conclusion of this Guardian article on all these measures:

“If this wasn’t us, how would we describe it? If this was Viktor Orbán’s Hungary, or Poland, what language might we use? Would an announcer on the BBC World Service declare: ‘Amid fuel and food shortages, the government has moved to cement its grip on power. It’s taking action against the courts, shrinking their ability to hold the ruling party to account, curbing citizens’ right to protest and imposing new rules that would gag whistleblowers and sharply restrict freedom of the press. It’s also moving against election monitors while changing voting rules, which observers say will hurt beleaguered opposition groups … ‘

And, if that wasn’t enough to set alarm bells ringing – to use Jimmy Cricket’s catchphrase – “There’s more!” To be precise, there’s Johnson’s interview on BBC Northern Ireland News on 2 October, in which he said: “…never mind life expectancy, never mind cancer outcomes, look at wage growth”.

This type of cynical/callous right-wing populism is currently being used by none other than… Orbán!! In order to ensure his re-election next year, Orbán is putting up posters which suggest raising the minimum – and making it clear that, if re-elected, he will then bring in even harsher actions against migrants/refugees, LGBTQ+ people, and Roma people.

Johnson IS a populist and nationalist PM – his route to becoming PM, following on his earlier interventions in the EU referendum campaign, saw him deliberately use racist, sexist and homophobic comments to build his right-wing base. Now, he’s deliberately weakening many of the institutions seen as important in liberal democracies – and, like Orbán, he’s attempting to make it harder for his hard-right government to lose power.

As Jonathan Freedland says of Johnson’s government and its current plans:

“There is a pattern here,…A populist government hobbling those bodies that exist to keep it in check, trampling on democratic conventions and long-held rights, all tighten its own grip on power.”