Cost of Living Crisis: Build the Resistance! Keep Up the Momentum!

Saturday 3 July saw the third one day strike by over 40,000 rail workers in defence of decent pay, jobs, and passenger safety. Large pickets were again out at stations across the country, with the network largely closed. The RMT strikes are becoming a focus for growing anger as working class people struggle to cope with the worsening cost of living crisis. In many places trade union and community activists organised solidarity rallies and joined the strikers on the picket line.

London: The RMT rally was called at short notice but still managed to get around 1,000 people. There was a wide range of speakers: Mick Lynch spoke as did Dave Ward from the CWU. From the GMB, the leader of the Mitie striking cleaning workers at St Georges hospital spoke. There were two disability rights speakers. Dianne Abbot and actor Rob Delaney also addressed the rally. The rally expressed a real desire not just to support the RMT but also to bring the union movement and the social movements together. 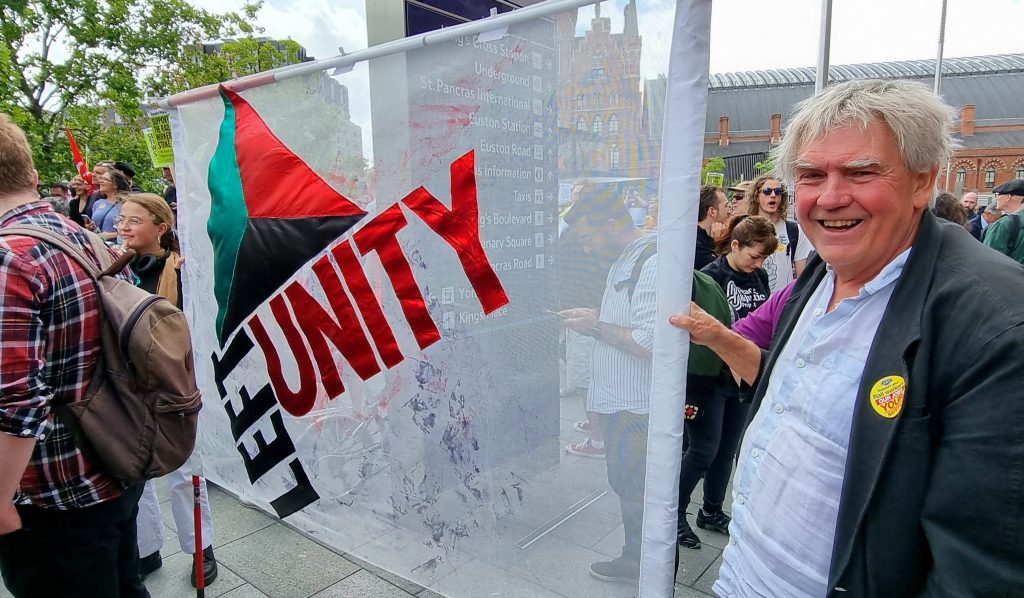 Significantly, RMT and CWU speakers didn’t just speak about the dispute itself but talked about how to unite the trade union movement as a whole and stressed the importance of the working class in struggles to defend the NHS, housing, education, to oppose racism and build international solidarity. The focus on how to take the whole movement forward was central to the speeches of many. Mick Lynch got a fantastic reception; everyone recognises the important role he is playing. It is early days but as the person next to us said at the end of the rally, ‘I’ve been waiting for this for nearly 40 years!’.

In Wales: There were rallies in Wrexham, Swansea and Cardiff. In Wrexham Unite Community members joined the RMT picket line in solidarity. In Swansea about 70 people attended a rally. Members from CWU, PCS and ASLEF joined the RMT pickets. Again, activists from campaigns and social movements lent their support and solidarity. There were speakers from Stand Up to Racism and Insulate Britain. 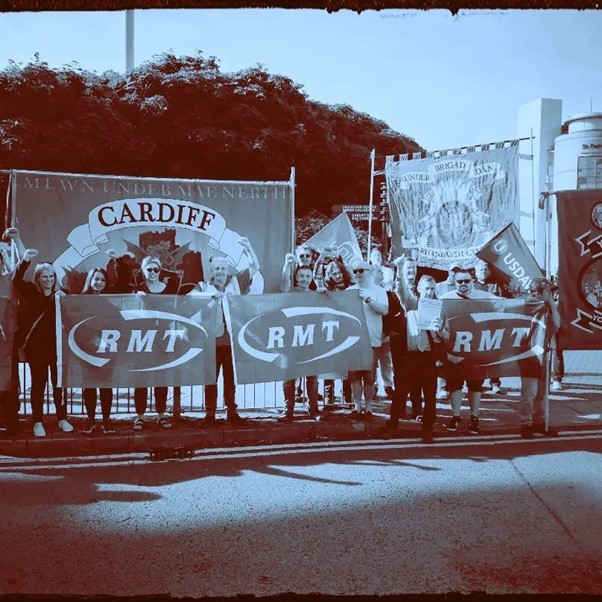 In Cardiff more than 70 people gathered in pouring rain at a rally in the City centre. Unions, labour movement organisations and community campaigns joined the RMT picket line including Unite, PCS, Cardiff and Caerphilly trades councils and Acorn Cardiff. Katrine Williams of PCS and President of Cardiff Trades Council stressed the power workers have when they act collectively: “The strike has inspired people because even with only 42,00 people the RMT can grind the whole country to a halt.” The People’s Assembly Wales has launched a campaign to bring unions, community campaigns, and social movements together around a series of common demands (more below).

Glasgow: More than 500 trade unionists and activists marched through Glasgow city centre to the RMT picket line outside Central Station. Many unions showed support for the strikers including Unite, Unison, UCU, PCS, EIS, GMB. The FBU drove a fire truck past the rally, with its siren blaring, bedecked in a huge Pride banner and flying FBU and RMT flags! Local politicians and community groups lent support including a big turnout from Living Rent. 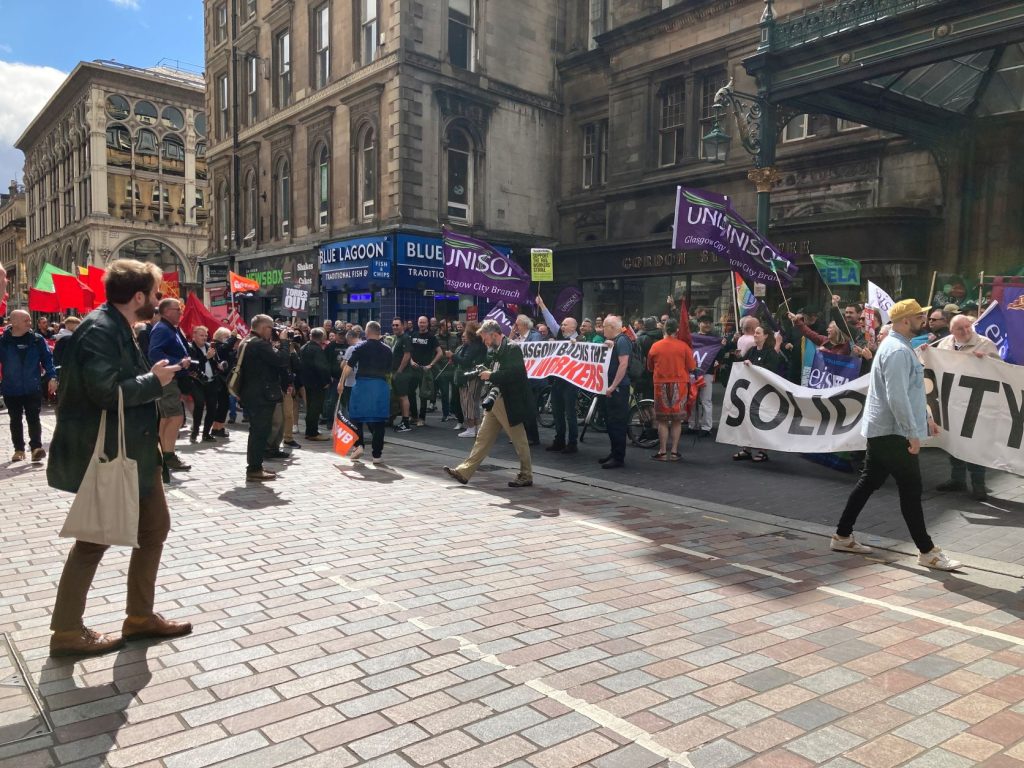 The SNP TU group and Peoples Assembly Scotland had banners at the station. There was much media attention. As well as speakers from various unions, Labour and SNP MSPs and City councillors addressed the rally. Various speakers called for the STUC and trade union leaders to organise an all Scotland demonstration in solidarity with striking rail workers. Gordon Martin from the RMT told the rally: “The Tories want their Thatcher moment. But they have underestimated popular support for this strike. Polls show massive backing for the strikes despite the inconvenience.”. Graham Campbell from SNP Socialists said “If the RMT don’t win, we all lose. The Tories are shaping up for an attack on all workers’ rights.”. He called for nationalisation of the whole of the rail network in Scotland (not just the rail operator which was nationalised in Feb this year.)

Leeds: Members of Leeds NEU and Bradford NEU along with supply teachers joined the RMT picket in Leeds with banners and flags. There was an excellent reception from the strikers and an RMT speaker agreed to address the NEU meeting in Leeds on Thursday 30 June.

Rail Strikers Show How to Fightback

Action by rail workers has been a catalyst for other groups struggling to cope with the cost of living crisis. This week the CWU held workplace meetings and started to ballot 115,000 postal workers for strike action over pay. CWU members in Crown Post Offices are due to resume their on-going strikes on 14 July after rejecting management’s latest offer and admin staff are to strike on 11 July. And now BT workers have voted 91-95% in favour of the first communication workers’ national strike in 35 years. Doctors’ union leaders praised the RMT for giving a lead as members threatened strikes to restore a 30% pay cut since 2008. Other health workers are also considering industrial action. In Scotland NHS unions are holding consultative ballots and urging rejection of a below inflation pay rise of 5%. Activists in the grass roots network “NHS Workers United-4-Scotland” are pushing for a solidarity demonstration and rally on 23 July. This week criminal law barristers began strikes over a 15% claim to compensate for cuts in legal aid fees, which mean many earn below minimum wage. NEU and NASUWT, have threatened to ballot their members in late summer. The Public and Commercial Services Union plan action in September over pay and threats of 90,000 redundancies.

Anger is mounting and unions are seeing increased membership for the first time in years. The TUC’s “Why Join a Union” webpage has received an 800% increase in visits since the RMT started their action. Just as importantly, as the reports above show, trade union action is beginning to coalesce with community campaigns as working class people struggle with ever rising prices. In a further indication of broadening resistance, wider social movements such as climate justice groups joined the RMT pickets. It is obvious from the level of support and solidarity, as well as most recent polls that public attitudes towards strikes remain largely positive.

However, it is important to recognise that the political situation is still finely balanced. It is certainly premature to herald a new dawn of union militancy. Our side has yet to recover from four decades of decline, defeat, and marginalisation. Decades during which workplaces and the nature of work have undergone profound re-organisation. 29.5million working days were lost through strikes in 1979; in 2018 less than one third of a million working days were lost (lower than 1943 when war time laws effectively made strikes illegal). 2017 saw the lowest number of workers on strike since records began. In the late 70s there were nearly 13 million unionised workers. In 2022 there are barely half that number. Collective bargaining and union recognition barely exist in many private sector organisations.

There is no doubt that the employers and the Johnson government are rattled by the speed at which workplace and wider working class unrest is spreading. So far, the anti-union narrative is not cutting through, despite media efforts to tout a “return to the 70s” (actually a decade of the greatest income equality in post war UK history!). Nevertheless, the Tories will pull out all the stops to prevent collective resistance spreading. Not just because they want a “Thatcher moment” to bolster Johnson’s flagging regime, but because the economic logic of capitalism compels them to do so.

Economic elites have done well out of the pandemic crisis. Their profits increased by 93% over the last year. At the same time consumer disposable income fell to its lowest share of GDP since 1956. Capitalist logic requires workers to pay the cost of any crisis through cuts, austerity, and lower living standards. It is this logic which lies behind Tory attacks on organised workers; maliciously sowing divisions by blaming “greedy unions” for inflationary wage rises. (A blatant lie when the Government’s own figures show that 58% of recent inflation is due to increased profits, whilst wages caused only 8%.) It also explains Grant Shapps’ legislative attack on the right to strike; allowing employers to use impoverished, agency workers to drive another wedge between organised and unorganised workers.

As Gordon Martin (Scottish Area RMT official) put it at Saturday’s Glasgow rally: “The RMT has recently lit a flame under the trade union movement. The job of all socialists and activists is to fan it!”. He is right. The vital thing now, is to keep the momentum growing. Any back-peddling by union leaderships will elicit an even more reactionary response from Johnson’s regime. Across Europe there is a shift to the authoritarian right as the recent deal between Macron and Marine Le Penn’s fascists clearly shows. Britain is no different. Deeply reactionary elements are influential in the Tory Party. Already the police are using new powers in a heavy handed assault on the right to protest. Any loss of momentum in the growing strike wave risks further authoritarian attacks on civil and trade union rights.

Where Do We Go from Here?

Firstly, it is staggeringly obvious that workers cannot turn to Starmer’s Labour Party. Labour’s refusal to back the strikes and its threats to discipline MPs attending picket lines is a shameful betrayal of working class people during an unparalleled cost of living crisis. Yet Labour shadow ministers blame inflation on excessive pay rises. Alongside the Tories they continue to spout the failed pro-business economic narrative that has made the UK one of the most unequal countries in the developed world.

Serious political opposition now lies outside parliament, in our workplaces and communities. Arguing to spread the strikes and deepen the growing coalescence of workplace, community and social movement resistance is vital. This means activists need to think through strategies and demands around which to pursue common actions relevant in workplace and community campaigns. In Wales the People’s Assembly has already made a start on this by initiating “Wales Against the Cost of Living Crisis”.

The role of the trade union leaderships and the TUC will be crucially important in leading the resistance, initiating solidarity activity, and linking struggles. However, leadership alone is not enough. Even left wing leaders like Sharon Graham and Mick Lynch can succumb to political and economic pressures from employers and government. To prevent this, unions need a well organised, confident, combative grassroots membership.

Unfortunately, workplace and local union organisation is in a parlous state after years of decline. A situation worsened by the “servicing” approach adopted in many unions until fairly recently, which treated members as consumers rather than active participants shaping union policy and campaigns. As a priority activists need to focus on rebuilding rank and file workplace organisation and building solidarity networks across the trade union movement. This is the key to ensuring union members become active participants in shaping union resistance. It is vital too in overcoming divisions within the membership. And finally, it is essential if members are to become confident enough to act autonomously when union leaders fail to correctly represent their interests.