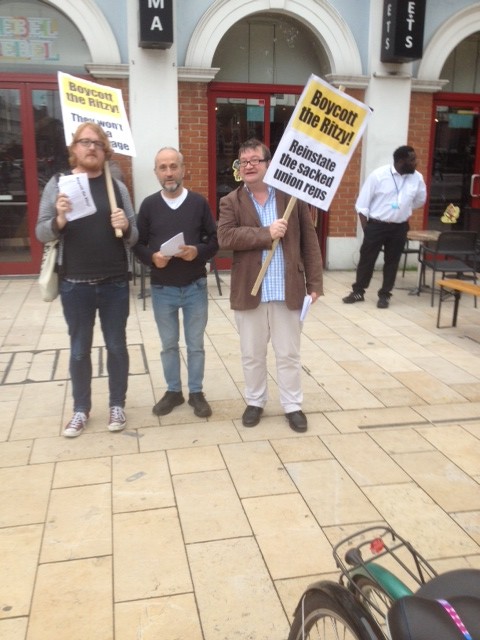 On Wednesday, members of South London Left Unity joined other Labour and trade union activists calling for people to Boycott the Ritzy cinema in Brixton.

Ritzy staff in BECTU have asked for the boycott in response to Picturehouse sacking three union reps, with a fourth awaiting a disciplinary hearing.  Their crime? – reading a union email reporting on a union meeting and not passing it on to management.  Over 50 people had read this email, however Picturehouse only fired the union reps.

Picturehouse, which is owned by the Cineworld trans-national corporation, has been in a longstanding dispute with their staff who are campaigning for a London Living Wage, currently £9.75 an hour.  These dismissals are clearly blatant trade union victimisation.

Cineworld made £90 million last year, with their CEO taking home over £1.2 million. The Ritzy is the most profitable cinema in the Picturehouse chain, yet they refuse to pay a living wage.

Picturehouse workers are going on strike again on Saturday 1st July, and there will be a rally at 4pm in Windrush Square, Brixton  – why not come down after the Not One Day More demonstration?