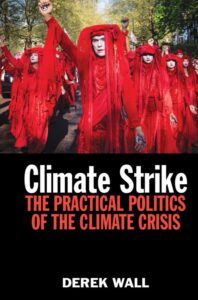 Derek Wall’s latest book, Climate Strike: the practical politics of the climate crisis, ‘had me’ from its very first page, with this well-chosen quotation:

Derek is a committed environmental activist who, for many years, held leading positions within the Green Party of England and Wales (GPEW). The review copy of his book arrived just as I’d finished the 5 degree chapter of Mark Lynas’s Our Final Warning: Six Degrees of Climate Emergency, which makes painfully clear why drastic climate action is needed right now.

And that is precisely what Derek’s book also does in its first two chapters – but what makes Climate Strike so timely and useful is that, in the remaining eight chapters, it also analyses various attempts to build pressure for change, and suggests practical ways in which, via open debate, analysis and increased co-operation, we can try to achieve those changes.

Before moving on to examine some of the important issues raised and examined by the book, one general strength should be pointed out early on: other than Alan Thornett’s comprehensive Facing the Apocalypse: Arguments for Ecosocialism (2019), you will not find another book on the current Climate Emergency that introduces you to so many valuable thinkers and positive initiatives on all the most critical issues. It is this aspect makes Derek’s latest book such an incredibly rich – and important – book to read.

As a companion piece to it, I would also highly recommend reading his Elinor Ostrom’s Rules For Radicals (2017) – particularly useful for considering possible ways in which to organise a post-capitalist future that is based on co-operation, and doesn’t depend on either markets or state structures.

As the book makes clear, the central dilemma for climate and environmental organisations and activists today is that we need both immediate emergency action to significantly reduce greenhouse gas emissions and stop the ecological devastation of the natural world, along with a longer-term strategy to create a world that is ecologically sustainable.

One problem for environmental movements, explored in Chapter 8, is the difficulty in persuading enough people of the seriousness of the Climate Crisis, because of the ability of many individuals to banish worrying or unpleasant things – including the Climate Crisis – from their minds. Derek cites George Marshall’s Don’t Even Think About It (2014), which deals with this phenomenon of cognitive dissonance. Another book which explores this is Stanley Cohen’s States of Denial (2001), which explains how not acknowledging (as opposed to simply knowing) a threat or an injustice allows people to avoid the need to take action.

Although Derek argues that the ever-worsening Climate Emergency the planet is facing stems from capitalism’s entire economic and social system – based on unsustainable continuous and ever-increasing production, consumption and capital accumulation – he does so in way that is free from any narrow dogmatism.

What this book does do, exceptionally well, is to analyse, in a balanced way, where we are now, and how successful/unsuccessful the various climate campaigns and organisations have been so far. In particular, as regards the UK, there are useful examinations of the roles of the GPEW, the trade union/labour movement, and of social movements like Extinction Rebellion and the YouthStrike4Climate.

His chapter on Green parties, in the UK and elsewhere, points out the conflict between their (often, but not in all cases, right-of-centre) origins – which were initially concerned with mainly ecological and environmentalist issues, with little or no focus on questions of social and economic justice – and the need for a fundamental political critique of the capitalist system itself.

In the UK, during the late 1990s, the GPEW seemed to be moving towards a more radical ‘left’ position, combining strong environmental and climate policies along with calls for social and economic justice. A further step in that direction was signalled by the formation of Green Left in 2006, which operated as an explicitly ecosocialist and anti-capitalist group within the GPEW.

More recently however, the GPEW (as with several other Green European parties) seems to be moving back somewhat to its more right-wing/conservative origins, rather than developing any class analysis or building strong links with the labour movement. This was displayed, for instance, during the on-line members’ discussions before and after GE2017 – with those on the right of the party arguing vociferously that the “leftwing stuff” should be left to the Labour Party, and for the GPEW to focus instead on environmental issues only.

More significantly, the GPEW’s Climate Campaign Committee – despite its members’ great efforts – failed to shift the party into launching a strong national campaign over the Climate Emergency. As a consequence, in 2018, it was Extinction Rebellion that really raised public awareness about the crisis the planet was facing.

However, typical of Derek’s fair and balanced approach throughout this book, he also points out that the GPEW, and other Green parties, can still have positive impacts – for instance, by helping raise awareness of the Climate Crisis, and by proposing some useful structural changes. At present though, the GPEW still fails to support the fundamental transformation of the mode of production which, ultimately, is vital to stopping Climate Breakdown.

As Derek makes clear from the start, Extinction Rebellion (XR)’s main weakness is that, at present, it still frames the Climate Emergency as more of a moral issue, rather than the political and economic one which, at heart, it is. Consequently, its main focus is on influencing public opinion, so that politicians and governments will then be put under pressure to act.

Whilst XR’s initial actions (along with the school climate strikes) certainly – and spectacularly – helped push the Climate Crisis up the political agenda as regards the general public, some of XR’s continuing actions have also resulted in the loss of a degree of sympathy (especially amongst sections of the working class).

XR’s ultimate problem, though, is that it fails to really consider power relations, or to adequately consider the different impacts of the Climate Crisis on different – often marginalised – social groups. As pointed out, XRUK really needs to develop ties with and connections to much wider networks and identities – rather as Earth First! did.

Several XR activists have been considering/calling for such steps, especially since the Autumn Uprising in October 2019 – including the development of a precise political and economic examination of what is meant by the slogan ‘System Change – Not Climate Change’. In particular, what ‘System’, and what ‘Change’?

Encouragingly, XR Scotland is currently considering a Reflection Piece (which apparently originated with XR Edinburgh), with the view to reaching out in precisely the way recommended by Derek’s book. Covid-19 permitting, the plan is to discuss and reach consensus on these issues at a Scottish People’s Assembly, to be held this October.

In fact, XR Scotland has already made a public announcement in solidarity the #BlackLivesMatter movement, and is aware how the climate and ecological emergencies have been caused, and are still being driven, by specific capitalist-linked aspects such as colonialism and white supremacy, as well as by capitalism’s ‘normal’ production/consumption/accumulation cycle per se.

As Derek makes clear in his final chapter, in order to build the momentum needed to force though the changes that need to happen, a range of strategies are required – including the central one of base-building. As the ultimate aim has to be moves to ecosocialism, he highlights the importance of Marxism in understanding today’s global heating crisis created by capitalism.

Amongst the strategies considered for achieving this are steps for greater co-operation between Marxist groups which recognise the need for ecosocialism. In particular, Derek mentions the work being done by Kali Akuno and others in the US, around Cooperation Jackson (Mississippi).

Several books are useful in developing a Marxist understanding of what Marx called the dangerous “metabolic rift” between humans and the natural world which the ‘logic’ of capitalism creates. One which Derek examines is Andreas Malm’s The Progress of This Storm, (2018), which provides a readable survey of the main Marxist attempts to theorise the ecological crisis. Other important Marxist contributions to this debate include both John Bellamy Foster’s Marx’s Ecology (2000) and Kohei Saito’s Karl Marx’s Ecosocialism (2017).

Derek’s well-argued case is that, ultimately, we need a post-capitalist ecosocialist society. From the most recent developments – XR Scotland’s Reflection Piece, and Left Unity’s recent adoption of an explicitly ecosocialist position, it seems that Derek clearly has his finger on the pulse of the environmental movement. This is most definitely a book to read, to discuss and – most of all – to act on.

The clock IS ticking!

11 August 2020
To submit an article for the 'Discussion & Debate' section of our website please email it to info@leftunity.org