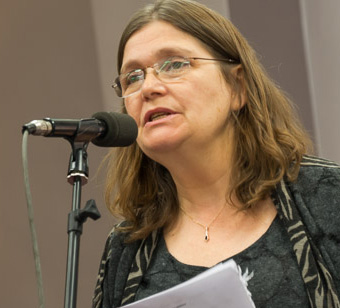 Felicity Dowling, principal speaker for Left Unity, will stand as a candidate in the coming general election in Ellesmere Port and Neston. Felicity lives in Neston and works in Ellesmere Port.

She says: “I want these issues on the ballot paper in Ellesmere Port and Neston at the coming general election. No other party currently standing will put them there.”

✓ The NHS free of any kind of privatisation, free at the point of need, well-funded from general taxation,
✓ Children well fed and well educated,
✓ Free state education, fully funded Special Needs,
✓ No-one left bereft, an end to punitive sanctions,
✓ Well provided social services,
✓ A sustainable future for the planet without fracking,
✓ Respect humans of every shape, colour, nationality, race or creed,
✓ Real jobs, with security and decent wages. Britain needs a pay rise,
✓ A shorter working week, time for family, for sport, for culture and even fun,
✓ A house building programme to build a million sustainable homes that people can afford,
✓ Respect for trade union rights,
✓ Create a million climate jobs, building sustainable homes and renewable energy technologies,
✓ Everyone should pay their taxes, including the very rich. 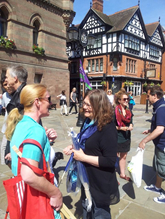 Felicity challenges ‘austerity’ as the rich ripping off the wealth of the public services. We believe in the welfare state, that the poverty being inflicted on this country is a disgrace. Ours is a very wealthy country, 8th in the world – but it’s very unequal. A tiny elite of very rich people rule this world. We can build a new kind of politics, one where communities work together for a better life and everyone has a decent standard of living.

Felicity is a local teacher and an active member of the NUT, a founder member of the local trades council/TUC, an activist against fracking, chairing the first anti-fracking meeting in Chester in Feb 2014, a campaigner for the NHS, for women’s rights and against racism, an organiser of #raisetheroofforhousing and against the bedroom tax, a defender of children’s rights.

“Cameron and co are worse than Thatcher. £30 billion more cuts, as Labour propose, would rip the heart from services desperately needed by ordinary people in this area. This is the start of a renewed tradition of struggle, of people standing together, for a decent sustainable future for our communities.”